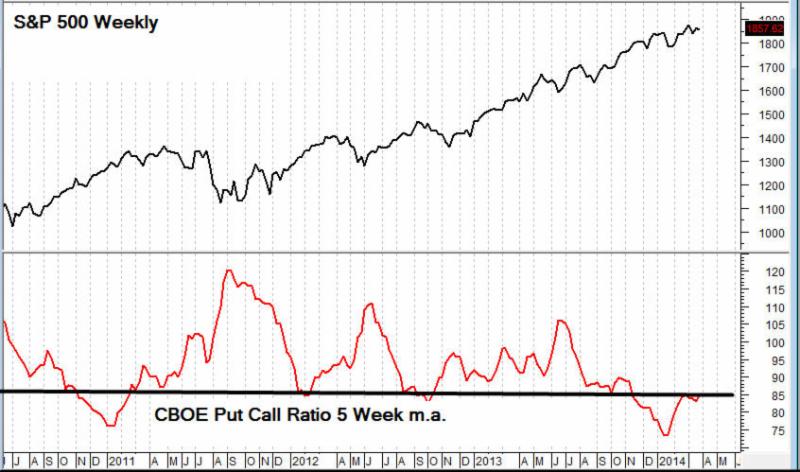 We have a bit of a dilemma. There are far too many bulls to justify further price appreciation, but a number of our gauges are oversold which would suggest that the market wants to go higher.

Note the put call ratio. It was just at the lowest it has been in several years. That would suggest trouble in the not too distant future. Option buyers are among the worst of all market prognosticators. HOWEVER SOME GAUGES ARE OVERSOLD.

On the other hand the 10 day moving average of the Composite Index is near levels that, in the past, have portended upward price movement.

Were it not for gauges like this, I would strongly believe that we are topping out, but this makes us scratch our heads. I rarely do this. I like to take a stand, but right now I’m a bit confused by the disagreement among indicators. The chart of the GLD, or gold ETF is bearish, but it’s trying to put in a bottom. The immediate problem is that the rally over the first couple of months has gotten 5 week RSI overbought. The chart of the Toronto Exchange is clearly in an uptrend. One only has to look at the chart to see that. It’s moving from the bottom left to the top right. Not only that, but note that 5 day RSI is just coming off an oversold condition. This should support higher prices. For the past month, the nightly hotline’s trading recommendations profited by 2.71 SSO points. The SSO itself gained 1.55 points. On Monday, the last day of March, Janet Yellen spurred the markets by saying that the U.S. economy and job market are far from healthy. So to combat this, she and her colleagues on the Fed will continue to do what hasn’t worked over the past five years. Amazing.

She feels that she can do this because there is “no inflation” Really? Gasoline has more than doubled over the past 5 years and food has also more than doubled. College tuition is soaring. Health care is going up sharply. Please. Spare me your 0.2% increase. in CPI.

Today we finished the first quarter of an intraday hotline. We charge only if you’re satisfied after each three month. We will be coming out shortly with the track record.