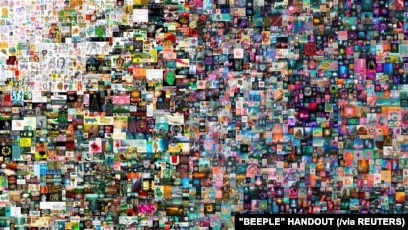 Until October, the most Mike Winkelmann — the digital artist known as Beeple — had ever sold a print for was $100.

Today, an NFT of his work sold for $69 million at Christie’s. The sale positions him “among the top three most valuable living artists,” according to the auction house.

The record-smashing NFT sale comes after months of increasingly valuable auctions. In October, Winkelmann sold his first series of NFTs, with a pair going for $66,666.66 each. In December, he sold a series of works for $3.5 million total. And last month, one of the NFTs that originally sold for $66,666.66 was resold for $6.6 million.

NFTs, or non-fungible tokens, are unique files that live on a blockchain and are able to verify ownership of a work of digital art. Buyers typically get limited rights to display the digital artwork they represent, but in many ways, they’re just buying bragging rights and an asset they may be able to resell later. The technology has absolutely exploded over the past few weeks — and Winkelmann, more than anyone else, has been at the forefront of its rapid rise.

“He showed us this collage, and that was my eureka moment when I knew this was going to be extremely important,” Noah Davis, a specialist in post-war and contemporary art at Christie’s, told The Verge. “It was just so monumental and so indicative of what NFTs can do.”