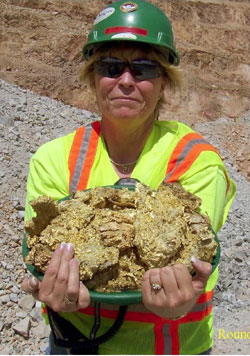 I hope you’re enjoying your holiday! It’s always nice to have a long weekend to spend with family and friends, to honor those who defended our country, and to get some distance from the things that are most pressing on our minds.

Which brings me to my topic for this week, none other than one of the most profitable investments one can make going forward, mining shares!

As I’ve mentioned in the past, mining shares will soon be a major buy, but importantly, not all mining shares.

The reasons are simple but far too often overlooked by investors.

First, there are dozens of mining shares that have been beaten up by the three-year bear market in precious metals.

They took on mountains of debt when gold was trading at the $1,800 to $1,900 level three years ago, thinking gold was headed to the moon. And now they are paying the price.

In addition, it’s looking to merge with giant Newmont Mining (NEM) to also help out its debt malaise by reaching economies of scale via merging with another giant. Newmont is a top-notch miner, but if it merges with Barrick, which I expect it will, then Newmont will lose its independence and get saddled down with Barrick’s problems.

In years past, I wouldn’t hesitate to recommend Newmont. Now, I’m not so sure.

Yet the company is now facing no less than three shareholder lawsuits due to $340 million of debt the company took on starting in 2008.

Its share price today: In the mid-$3 range, having lost 77 percent of its value since its 2011 high.

Will it thrive again? Hard to say. The company has taken the right steps recently, writing off non-performing assets and working hard to relieve its debt load and to increase operating efficiencies.

My point is this: In 2000, when gold bottomed at $255 an ounce, buying mining companies was like shooting fish in barrel.

Today, it’s entirely different. You must do your homework before buying any mining shares. Period.

Russia’s biggest gold miner, Polyus Gold, is also looking at hedging. As is Barrick Gold and many others.

That would be fine if gold or silver were to stay in bear markets. But they are not. And I want my followers to be rewarded as the price of gold and silver rise again. Hedging robs them of that.

Third is the quality of the properties and the ore the miner has. All over the world, gold is reaching peak production. In 1995, for instance, 22 gold deposits were found that contained more than 2 million ounces each.

There’s simply a lot less gold to mine. All the gold ever mined could fit into a 60-foot cube.

Overall, ore grades have plunged more than 35 percent since 2001 …

Shooting fish in a barrel this time around, as gold and silver begin new bull markets higher? Hardly!

This time around, you will have to be very selective, constantly monitoring company developments, management decisions, and more.

And then there are the large swings that will inevitably occur. Catch a few of those, grabbing gains on rallies and buying back in on pullbacks, and you could do even better.

So stay tuned, the time to start buying and trading mining shares will soon be here.

P.S. Use my 4-part Freedom Plan to reclaim your privacy, protect your money, GROW your wealth and build American Revolution 2.0.