Did China Kick-Start A New Bull Market In Gold? 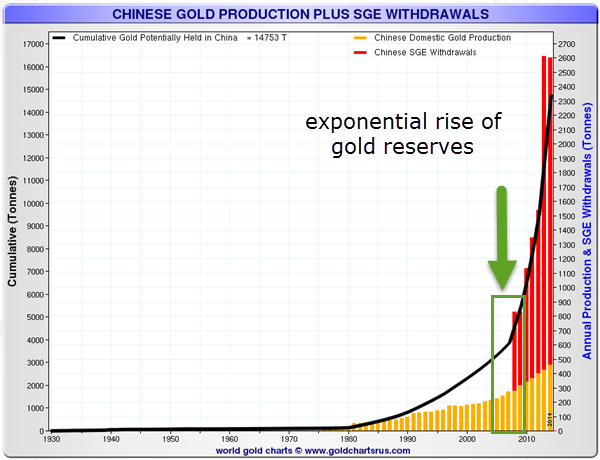 Many have written about the devaluation of the Chinese currency last week, in particular its causes and consequences.

In mainstream media, most opinions are centered around the weakness of the Chinese economy  which is now growing less than 7%. Logically, they argue, China wants to stimulate exports and stabilize the currency by ‘de-pegging’ it from a strengthening dollar.

The alternative media basically is focused on a new phase in the currency war, the aim to control capital outflows, and, obviously, the wish of China to enter the IMF’s based SDR currency system (for which a free market currency is a prerequisite).

While all that could be true, we believe there is something much more important going on. Something that truly everyone is missing.

We believe there is reasonable chance that China kicked off the bull market in gold!

How? Very simple. China ‘de-pegged’ in a way its currency from the dollar. Make no mistake, this is a HUGE event. The second biggest economy in the world, which is on its way to become THE biggest economy worldwide, did say ‘goodbye’ to the dollar reserve currency. Because of that, it is now more than ever relying on its ‘real’ monetary reserve, i.e. GOLD.

To make that point, you have to look at the big picture. China is a country focused on the very long term. In order to understand their standpoint, you need to take a similar view. The chart below (courtesy of Sharelynx) illustrates the very long term plan of China when it comes to their currency. Any coincidence their gold reserves started to grow exponentially since the great financial crash? You can look at it from another point of view as well. September 2011 was the top of the gold price. Coincidentally, it was also the month in which the Swiss National Bank pegged its currency (the Swiss Franc) to the Euro. The Swiss Franc, being a safe haven currency, was rising too much too fast … until the monetary planners of this world decided to stop that trend. Gold stopped rising in the same month. Last week, China did the exactly opposite of what Switzerland did in September 2011. And we believe gold will not be immune to this event in currency land.

It is clear that China is working towards a gold standard, although they are taking it very slowly.

These are important signals for secular investors. In our mind, it is another confirmation that precious metals are here to stay, contrary to the mainstream thought at present. In other words, a contrarian dream.

Meantime, we observe a significant decrease in selling pressure in the precious metals complex lately.

The gold market is giving us enough signals that it is bottoming, and that the 4-year decline which started in 2011 is a cyclical correction in its secular uptrend.