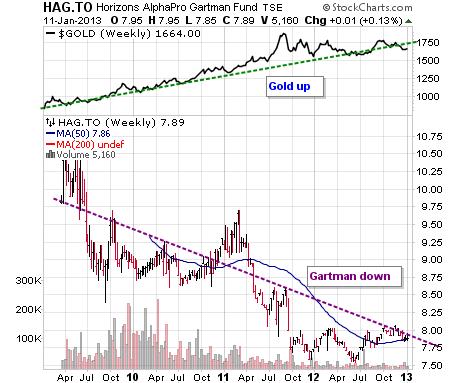 I received the following from reader Bill Teter:

The CNBC “Fast Money” program, airs Monday through Thursday for one-hour nightly, often features Dennis Gartman as a guest commentator.  He’s intelligent, a ‘fun’ guest who always responds to the question “Good to see you, Dennis” with “Always good to be seen!”  Fast Money often refers to Dennis as “The commodity king” for his opinions on all things so related, from coal to cotton to platinum.  I perk up every time Dennis appears as a guest, because usually the subject of the price trend in gold will be discussed.  Dennis always appears as a kindly and gentlemanly person, and is one of the favorite Guests and some-times Panelist on “Fast” (as they often refer to their show).  After all, “Fast Money” first-and-foremost, is a SHOW!

But here’s what I learned long ago about Dennis through my personal experience, and now it is revealed in a graph: Dennis is more likely to serve as a good contrarian indicator!  I wasn’t aware that there was a fund that would prove that point until Peter Degraaf ran this chart and commentary today

Featured is the Horizons Gartman Fund since its inception, with the price of gold at the top. “…We also once again had to endure Dennis Gartman throwing so-called Goldbugs under the bus for the umpteen time (which if history is any indication shall once again prove to actually be a buy signal)….”

While I believe Bill Teter’s assessment is accurate,  no one has come close to being so badly wrong on gold for more than a decade (while being so arrogant) as Jon “Tokyo Rose” Nadler, Dennis Gartman is a shrewed marketer and a very good public speaker. He has masterfully played the media to a point where his actual performance takes a back seat to how well he comes across in their minds. He can and is for the most part, entertaining.

Once you appreciate this, Dennis the Menace will become little more than a fly and rather than swatting him to his death, just appreciate that he’s a goldbug who can’t bring himself to “come out of the closet” as in his mind it would throw a monkey wrench into the superb (and masterfully developed) propaganda machine he knows the media has bought into when it comes to his actual gold forecasting record among his overall performance. Have pity as down deep he knows GATA is right but he also knows supporting GATA’s argument would cast him as a kook, conspiracy nut, and tin-foil hat wearer. His ego and his business couldn’t afford such a label.