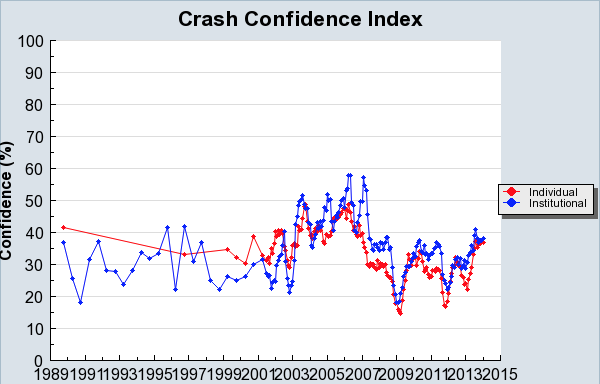 Also: Crash Complacency at Highest Level Since 2007 by Chris Hunter

Tomorrow, we will outline our big picture view. But today, we’re going to reply to colleagues with caveats, quibbles and corrections.

First, our colleague and editor of the British magazine MoneyWeek Merryn Somerset-Webb, who lives in Edinburgh, Scotland, took issue with our suggestion that small governments are, ceteris paribus, better than big ones:

If Scotland votes for independence it will be as a socialist nation, not a wealthy capitalist one. The result will be profound misery. I really don’t think it is something to wish for. Already a disaster in the making. What small countries actually do these days if they aren’t tax havens full of educated people (Switzerland) is indulge in one variety or the other of nepotism/theft/corruption/public sector crowding out and then collapse.

Merryn is probably right. Big or small, the ruling elite always wants as much misgovernment as the country can afford – and often more!

The idea of modern government, we remind dear readers, is to pretend that the feds work for the citizen. The little guy is led to believe that his enemies will be smitten, that the rich will be robbed so that the stolen loot will be given to him, and that all he holds dear will be protected, enhanced and made obligatory.

That’s why it’s so hard to feel sorry for the guy… even when the feds clean him out.

Are US Consumers Really Deleveraging?

Meanwhile, our colleague here at the Diary, Chris Hunter, tells us that the US consumer is no longer deleveraging. Now, he’s borrowing again. Reuters has the story:

US household debt rose in the latest quarter by the most since before the recession, a sign that Americans may be nearing the end of a multi-year belt-tightening trend, data from the Federal Reserve Bank of New York showed on Tuesday.

But we give the American consumer his due: If there is any way for him to get himself into a deeper hole, he’ll get out the spade. The Fed’s low-interest rates are waiting for him. And now that he has a little more equity in his house, he may be inclined to start digging.

But he’s getting older. He tires faster. And he’s seen what happens when he gets himself in over his head. He remembers how uncomfortable it made him feel.

Besides, demography is starting to turn against the “borrow and spend” economy. So, it is not clear that he will continue to borrow at last quarter’s rate.

Age and population – along with debt – have big consequences for stock prices. Yesterday, included a wild figure for the effect of demography on stock prices. Even before we were challenged, we had our doubts. So we wrote to the analyst responsible for it to ask for clarification.

It turns out that the NEGATIVE 15% figure was a composite. Much of that number is based on the market value of stocks compared to GDP. At today’s levels – based on historical patterns since 1871 – the model predicts that stocks are going down… for a long, long time.

Demography is just one component. Our analyst tells us that demography alone would account for a negative pull equal to about 5% per year – the largest negative number ever recorded. Which makes sense; never have so many people in the US approached retirement at the same time.

But wait. Does an aging population in the US really matter?

This is a question we have been asking recently at our small family wealth advisory service,Bonner & Partners Family Office.

“Nearly half of S&P 500 profits come from overseas,” Chris, who also serves as our family office project’s Investment Director, points out. “US demographics shouldn’t have so much effect.”

“But most of those overseas profits come from Europe and Japan,” counters Rob Marstrand, our Chief Investment Strategist. “And their demographics are worse than our own.”

Finally, we decided that the source of S&P 500 profits didn’t matter. The model looks at the effect of demographics on stock prices, not on earnings. Prices today are built upon today’s earnings – which include overseas sales and profits.

The study merely predicts that old people will sell stocks – no matter what their profits – reducing the P/E… and, of course, the prices.

For a nation, as for its capital structure, debt and demography are destiny.

Of course, any model based on history assumes that the future will be more or less like the past. It anticipates that extraordinary things that are happening today will be “normalized” tomorrow.

In the past, when stock prices, GDP, debt and demographics have been similar to today’s, the process of normalization brought stocks down – a lot… and over a long time.

But never in the past did a nation have QE and Janet Yellen.

Editor’s Note: If Scotland does gain independence, the British Empire loses another “colony.” ALL empires die eventually, and so too will the US Empire. In fact, here’s a FREE book explaining exactly how the US Empire will crumble…

From the desk of Chris Hunter, Editor-in-Chief, Bonner & Partners

This is the upshot of Yale professor Robert Shiller’s Crash Confidence Index.

It measures, through the use of surveys, confidence among individual (red line) and professional (blue line) investors that there will be no stock market crash in the succeeding six months. As this chart shows, investor conviction that there will be no crash in the next six months is at its highest level since early 2007.

It shows that great buying opportunities – such as in 2003 and 2009 – are when the majority of investors feared a crash in the coming six months. Stock market peaks tend to come when investors become complacent again.

Long-term investors should wait until investor confidence collapses again. This is when the really big money will be made.