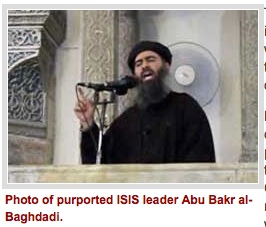 A subtle, but fundamental, shift — not yet widely discussed in financial circles — is sweeping the globe, with enormous potential consequences for the U.S. economy, for investors and for you personally:

The old global war on splintered terrorist cells
and ragtag militias is turning into a global war
against fully armed, well–organized armies.

This is happening in all three theaters of war that are currently at the top of the news — in Iraq and Syria, in the region surrounding Israel, and in Ukraine.

It’s causing a rapid, tectonic shift in strategy-making at the Pentagon, in the White House and in Congress.

It could cast a long shadow on nearly everything that Washington does to the U.S. economy — warping the federal budget … prodding still more Fed money printing … and creating all kinds of new excuses to pursue reckless, unsound policies.

And it’s likely to trigger a series of black-swan events — powerful, unpredictable changes that strike like a comet from distant space.

So, first, let me demonstrate for you the enormity of this change. Then, I’ll explain the economic and investment consequences.

Iraq and Syria: ISIS is Already a Full-Fledged Army

ISIS used to be viewed as just another al-Qaeda affiliate among the dozens of groups that have sprouted up like wildfire across Africa and Asia — all competing for recruits, few coordinating their activities.

Today, after months of prescient warnings that fell on deaf ears, that idea is finally being recognized for what it was: naïve and dangerous.

According to the New York Times, “ISIS’s success has alarmed American and regional security officials, who say it fights more like an army than most insurgent groups, holding territory and coordinating operations across large areas [with] a network of regional commanders who have their own subordinates and a degree of autonomy.” The leadership structure, explains the Times, includes 25 deputies across Iraq and Syria, among which about one-third were military officers during the rule of Sadam Hussein, and nearly all were at one time imprisoned by American forces.

Behind this are the recent successes of an ISIS campaign to free hundreds of militants from Iraqi prisons, including intelligence officers and soldiers that had been leaders of Sadam’s elite Republican Guard. Moreover, many are graduates from Sadam’s military academies and are highly skilled strategists with years of experience fighting U.S. forces.

Now, with its control of large populated areas, ISIS is likely leveraging this experience to recruit and train tens of thousands of unemployed, disaffected youth. At the same time, for the global recruitment of jihadists, ISIS has turned mostly to foreigners, including Saudis and Westerners with advanced media and propaganda skills.Behind this are the recent successes of an ISIS campaign to free hundreds of militants from Iraqi prisons, including intelligence officers and soldiers that had been leaders of Sadam’s elite Republican Guard. Moreover, many are graduates from Sadam’s military academies and are highly skilled strategists with years of experience fighting U.S. forces.

Result: Both locally in the region and internationally across four continents, ISIS is like a jolt of electric-magnetic energy that’s transforming a messy, disjointed terrorist field into an aligned, singularly focused, global terrorist army. Now, mostly in Syria and Iraq; soon, also in Africa, Europe, North America and Asia.

Lebanon and Syria: Before ISIS, Hezbollah
was the Largest Terrorist Army in the World According to The Tower Magazine, a reliable source on Israel and the Middle East, before ISIS burst onto the scene, it was Hezbollah that was “probably the world’s largest, most sophisticated, wealthiest and most militarily capable terror organization.” They explain how …

The only saving grace: It’s vehemently opposed to the Sunni ISIS; and in the Syrian civil war, thousands of its fighters have been directly confronting ISIS armies on the battlefield.

Until just a few days ago, the Western-backed Ukrainian army was on the verge of defeating Russian-backed militias seeking to establish a break-away region aligned with Moscow. And even if Ukraine’s central government could not achieve victory, NATO and Russian forces always were two steps removed from a direct confrontation. Both were fighting a proxy war; neither involved in direct conflict.

Now, suddenly that has changed.

Now, the Western-backed Ukrainian troops are no longer making steady advances against inexperienced, oft-disorganized and extremely discouraged, local militias; they are retreating in panic from the vanguard of one of the largest, best-organized invading forces on the planet: the Russian army.

It seems, in fact, that Russian President Putin’s strategy is to escalate its penetration into Ukraine in three phases:

Phase 1 was his so-called “humanitarian convoy” that defied the International Red Cross and crossed the border into Ukraine without IRC inspection or escort two weeks ago.

Phase 2 is Russia’s stealth invasion, now under way, using unmarked armament and troops. Despite Mr. Putin’s repeated denials, evidence is now virtually conclusive that his army has crossed into Ukraine and reached the battlefields on two separate fronts.

And it looks like Phase 3 will begin soon after he publicly admits the presence of his troops — an admission that I believe will presage an unabashed, all-out invasion by the Russian armed forces.

Meanwhile, Russia’s total tank strength is massive — over 15,000 units or nearly double America’s. And its self-propelled guns (SPGs) number close to 6,000, also triple the U.S. arsenal. Both these tanks and SPGs could be critical on the Ukrainian battlefield.

I’m not implying that the U.S. or NATO will confront Russia on an Eastern European battlefield. NATO commanders have effectively vowed not to do so unless Russia invades a NATO-member nation, such as those with large Russian-speaking minorities, like Estonia, Latvia and Lithuania.

Rather, my points are twofold:

First, Russia has tremendous military resources to spare. It could easily and quickly overwhelm the Western-backed Ukrainian army with just a small fraction of its forces. Moreover, given the West’s implicit vow not to respond militarily, it could do so with almost total impunity.

Second, the only way Western Europe and the U.S. can or will retaliate is via sanctions on Russia. But unlike any previous sanctions, they will not be constrained or contained. Nor will Russia’s response. For the first time, Western Europe and the U.S. will hit hard with actions that cripple Russian industry, gut their stock market, and set off a far more dangerous round of tit-for-tat East-West economic warfare.

That’s the mistake most analysts and investors have already made — repeatedly. But you can be different. You can step back from the trees of day-to-day trading and see what many experts have been largely ignoring, what has been obvious to Larry Edelson and our Money and Marketsteam for many months:

* Still sits at the pinnacle of all military forces in the world, with no peer in terms of advanced weaponry, warships and air power.

* Still boasts the largest economy in the world.

* Still has the strongest alliances with the largest number of countries.

* Already has new drilling technologies to achieve the long-sought goal of energy independence.

If we slide further down our current fiscal and monetary path, could this change? Absolutely. But right now, the U.S. continues to be the single most secure and dominant economic/military power on the planet; and that helps explain why flight capital from all over the world continues to flow into the U.S.

Not just from frightened families in the Arab world, as I illustrated here last week, but also from …

* Major banks and other financial institutions still heavily invested in North Africa, the Middle East, Pakistan and other hot spots.

* Russian oligarchs, who have already moved a good portion of their big cash hoards out of Russian banks, and are now taking the rest …

* Japanese pension funds and institutions, who had invested heavily overseas in recent years, and are now shifting from what they consider “hot zones” (like the Persian Gulf and North Africa) to what they deem “safe zones” like the U.S. and Japan itself.

* Plus many other sources of flight capital, some hidden or some not.

This helps explain why the U.S. stock market has been going up and could continue to do so.

Consequence #2. Escalating economic warfare with Russia; a closer alliance between Russia and China; and bigger efforts by both to draw unaligned developing nations into their fold.

Consequence #3. Big new strains on the shaky U.S. federal budget: In Eastern Europe, NATO members are already pleading for — and about to get — more NATO forces. In Washington, the Pentagon is already pushing for money to finance a stronger U.S. military presence globally. And all over the U.S., Americans, who, just weeks ago, were still demanding cutbacks in military spending, are now pleading for big increases.

Consequence #4. More Fed funny money, or worse! If the U.S. is waging all-out economic warfare with Russia and China … if the U.S. budget deficit is going haywire again … and if all this begins to look like a new black cloud hovering over the U.S. economy …

The Federal Reserve is not going to stand idly by. It will do everything in its authority — or evenoutside its authority — to offset the real or imagined impacts on the financial markets, the job market, the real estate market and more.

What exactly will the Fed do? Too soon to say. But at the very minimum, it could use these new threats to the economy as another in a long line of excuses to delay what it should have done long ago — sopping up some of the $4 trillion in stimulants that it has injected into the economy bloodstream since 2008.

And this is just the beginning! If military and economic warfare continue to escalate globally, there’s no crystal ball that can divine the ultimate consequences. That’s why this environment is so prone to black-swan events.

2. Continue to seize the opportunity to profit from the select investments we’ve been pointing you to — in sectors like domestic energy and technology.

3. Keep core, long-term positions in cash and gold — not only to protect yourself against financial threats, but also to help cushion against the inevitable black swans.