CURRENCY WARS REDUX: IS THE US DOLLAR NEXT? 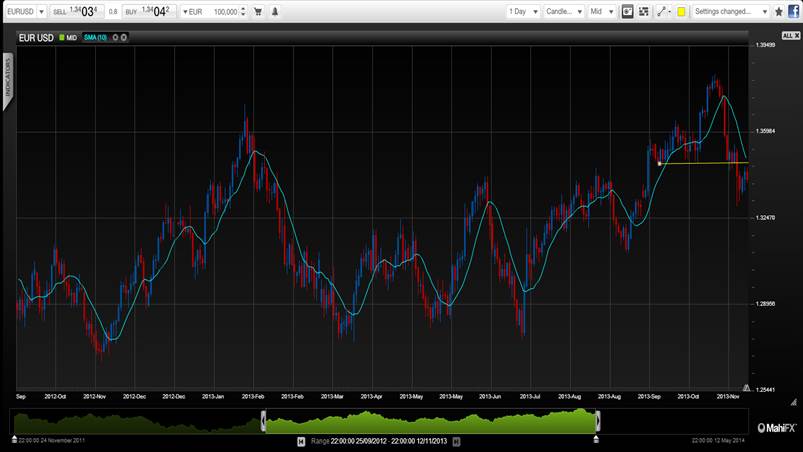 The U.S. Dollar has made a sharp move since October against a basket of currencies

Who wants a strong currency? If that question was for an opinion poll of finance ministers and central bankers, the response would be a firm no one. But in reality, no poll is needed. The last couple of weeks’ action has spoken louder than words.

Forex traders were once again reminded that when a currency makes strong gains the chances of verbal or monetary intervention are probably not far off. Losses on long positions can swiftly follow. Those long the U.S. dollar (USD) should be cautious.

Talk of currency wars has made the headlines regularly since the outbreak of the financial crisis in late-2007. A lack of economic growth prompts countries to try and grab a slice of someone else’s demand. The quickest way to do that is to devalue the national currency giving goods and services of that country a short-term competitive advantage.

The yield advantage made AUD and NZD attractive to investors engaged in carry trades – that’s borrowing in a low interest rate currency to buy a higher interest rate one. However, policy makers in those two countries decided recently that enough is enough.

Last week, the European Central Banks cut interest rates ostensibly to avoid deflation. But many observers interpreted it as a move to also weaken the EUR. It worked. On the same day of the ECB announcement the Czech Central Bank intervened sending the CZK plummeting.

A currency war victory for the ECB How strong of a U.S. dollar is the Fed prepared to stomach?

With EUR/USD (FOREX:EURUSD) down, GBP/USD (FOREX:GBPUSD) stalled and the USD/JPY (FOREX:USDJPY) weakening, that leaves the (USD) as a potential stand-out among the majors. Since late October, the U.S. Dollar Index (NYBOT:DXZ13) has moved from around 79 to just over 81 against a basket of currencies – a fairly sharp move — although USD is still sitting below a high of 84.58 reached in September.

The question is, “Will the U.S. Federal Reserve allow USD to make continuing substantial gains against other major currencies?” After all, the U.S. economy, although not quite firing on all cylinders, is still doing better than most European counterparts. And Japan has yet to prove it can sustain its recent growth.

But the answer is that the Fed probably does not want a strong USD. That will certainly be one dilemma it faces if it ever manages to taper its quantitative easing program. Another often overlooked factor is that U.S. debt is substantially held by foreigners. This gives the U.S. authorities a strong motive to devalue – a form of default by stealth.

If USD does start making sustained gains – particularly sharp ones – dollar bulls should be cautious.

About the Author Justin Pugsley

Justin Pugsley is the forex and gold markets analyst for New Zealand-based trading platform provider MahiFX. He is a keen student of markets, economics and history. Prior to working with MahiFX, Justin worked for a number of leading media organisations such as Thomson-Reuters and Dow Jones/Wall Street Journal.