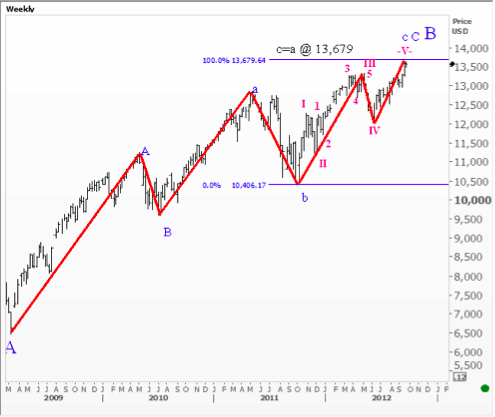 “Oft expectation fails, and most oft where most it promises; and oft it hits where hope is coldest; and despair most sits”

About six-weeks ago, our wave count suggested it was time to get short stocks. We shared the chart below with our Global Investor service Members at the time, suggesting they get short the Dow Jones Industrial Average. So far so good…

We noticed Marc Faber was at it again yesterday, suggesting US stocks should have fallen at least 50% now that the left’s hero is back in the White House.

From my partisan perch, I have seen what President Obama has done to us in four years, so was a bit surprised/shocked/stunned/angry/amazed (insert other words not appropriate for a family publication) he was rewarded with four more to completely finish the job of destroying the US economy. After some reflection yesterday (after I came in from the ledge), I thought about my wife’s grandfather, a real man and proud daily scotch drinker to boot; he used to say to me, “Jack, if the whole world is sane thank God I am crazy.” Now I get it.

On 24 September 2012 we said: Dow Jones Industrial Average Weekly: Symmetry and wave count suggest we may have seen a decent intermediate-term top here in the DJIA: Same chart above, but fast forward to today: If our assessment about our President’s ability to further destroy real economic growth here is correct, it significantly increases the probability of another major global systemic event. Why? It’s because Europe and Asia need the US to grow, buying time for them to alter their economic models to the new reality of slower global demand. For Europe it is austerity and deflation in periphery country unit labor costs, and in China it is reduced reliance on exports and dangerously high levels of internal investment.

It’s interesting that both Europe and China were routing for President Obama, based on news reports, during the campaign. Well, you know the saying, “Be careful what you wish for it may come true.”