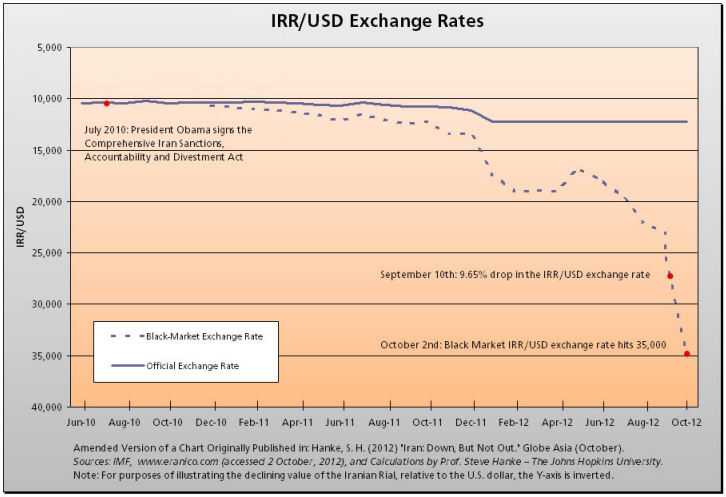 Note: “Hyperinflation is essentially a political event. Weimar Germany was triggered by war reparations, Zimbabwe by confiscation of property accompanied by capital flight (including human capital), and Iran by US and European embargoes (a clear act of war)” – via Hyperinflation Hits Iran; Monthly 70% Inflation Rate; Reflections on Economic Warfare by MISH’S Global Economic Trend Analysis

Ed Note: You’d think that a Government of a Hyperinflation hit, rioting populace might be eager to to distract their population with, oh….. say a Nuclear Bomb? – THINK TANK: PATH TO IRAN NUKE WARHEAD 2-4 MONTHS

Currency Collapse Has All the Markings of a Full-Blown Crisis

Matters are beginning to come to a head in Iran.

Iran’s currency, the rial, has collapsed.

Riots have begun. Its government has rapidly lost its authority. And the Iranian economy is unraveling.

This has all the markings of a full-blown crisis.

It will have an uncertain impact on the region and the wider oil market. This could get very unpredictable and very nasty.

While attention is currently focused on the recent sharp drop in the rial’s value, the problem has been recurring for over a year. To combat it, Tehran established a Forex Trade Center (FTC) on September 23 to prevent a continuing drop against foreign currencies, providing dollars to importers of essential foodstuffs, medicine, and fuel at a fixed price.

In less than the first week of FTC operations, the currency’s effective market rate declined by more than 30 %.

Hanke has also been following the Iranian currency crisis. He wrote these thoughts yesterday:

“For months, I have been following the collapse of the Iranian rial, tracking black-market exchange-rate data from foreign-exchange bazaars in Tehran. Using the most recent data, I now estimate that Iran is experiencing a monthly inflation rate of nearly 70%, indicating that hyperinflation has struck in Iran.”

“Since the U.S. and E.U. first enacted sanctions against Iran, in 2010, the value of the Iranian rial (IRR) has plummeted, imposing untold misery on the Iranian people. When a currency collapses, you can be certain that other economic metrics are moving in a negative direction, too. Indeed, using new data from Iran’s foreign-exchange black market, I estimate that Iran’s monthly inflation rate has reached 69.6%. With a monthly inflation rate this high (over 50%), Iran is undoubtedly experiencing hyperinflation.

When President Obama signed the Comprehensive Iran Sanctions, Accountability, and Divestment Act, in July 2010, the official Iranian rial-U.S. dollar exchange rate was very close to the black-market rate. But, as the accompanying chart shows, the official and black-market rates have increasingly diverged since July 2010. This decline began to accelerate last month, when Iranians witnessed a dramatic 9.65% drop in the value of the rial, over the course of a single weekend (8-10 September 2012). The free-fall has continued since then. On 2 October 2012, the black-market exchange rate reached 35,000 IRR/USD – a rate which reflects a 65% decline in the rial, relative to the U.S. dollar.”