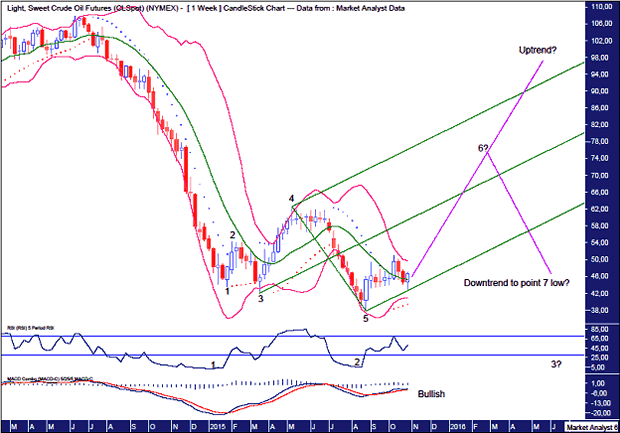 The oil price has had a nice rise in the past week so let’s see just what is going on using the weekly and daily charts. We can see the 5 point broadening low in place. While we have nailed the last two lows I feel the longer term view may be a touch off. That revolves around price not trading below the 2009 low of $32.70. I am starting to have second thoughts about this. Why?

I was expecting a bigger rise to have already been witnessed by now. It hasn’t. I’m pretty finicky with how things look and this has caused me to review my longer term outlook.

There is another reason why I favour one final low after this rally but will leave that for the moment as it revolves around a pattern on the daily chart.

The MACD indicator is bullish indicating the likelihood of higher prices in the weeks ahead.

The PSAR indicator has a bullish bias with the dots underneath price.

The Bollinger Bands show price looks to be finding support at the middle band and I suspect a solid move higher is on the cards here.

I have drawn an Andrew’s Pitchfork which shows last week’s low right at support from the lower channel line. I am now looking for price to head up into the upper channel. From there the bull trend will gain momentum or a point 6 high will be put in place.

Now let’s zoom back in with the daily chart. The Stochastic and MACD indicators are both bullish.

The Bollinger Bands show price has bounced bullishly off the lower band and already has the upper band in its sights.

The recent low was right at support from the 61.8% Fibonacci retracement level and also the 50% Fibonacci Fan angle. Beautiful.

This low looks to be a point 4 low in a 5 point broadening top formation. This is the reason alluded to as to why I now think new lows below the 2009 low will eventually be seen. The expected point 5 high will also be the point 6 high of the 7 point broadening low formation. Patterns within patterns! Human behaviour repeats across all markets.

Also, this point 4 low is effectively a bullish double bottom with the point 2 low so some fireworks could be expected.

We can look at likely topping levels, if indeed that is what will play out, after this move has built up some steam.

About the The Voodo Analyst

Austin Galt is The Voodoo Analyst. I have studied charts for over 20 years and am currently a private trader. Several years ago I worked as a licensed advisor with a well known Australian stock broker. While there was an abundance of fundamental analysts, there seemed to be a dearth of technical analysts. My aim here is to provide my view of technical analysis that is both intriguing and misunderstood by many. I like to refer to it as the black magic of stock market analysis.