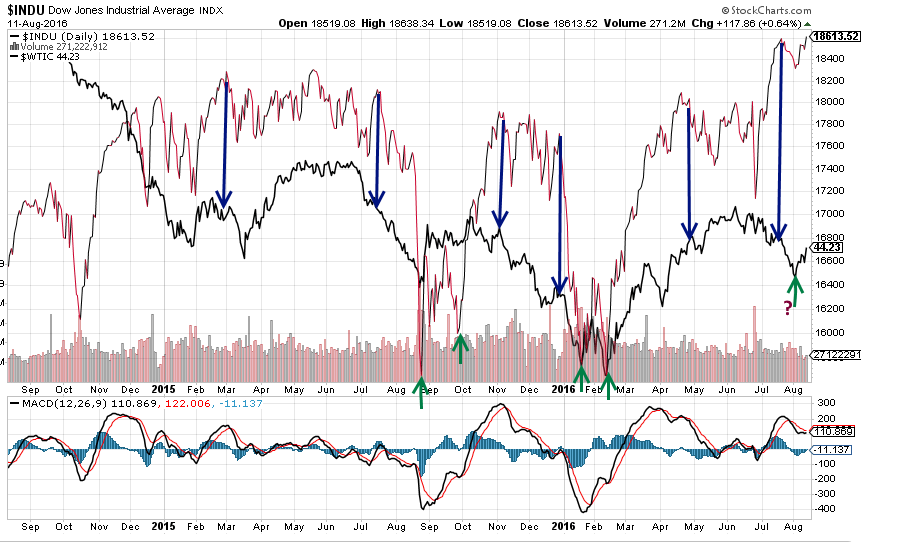 Fast forward to Jan-Feb 2016 and you notice that the Dow followed crude oil to a “T”. The only difference being that while crude oil dropped to a new Low in Feb, the Dow put in a higher low. After trading above $51.00, oil consolidated and many a naysayer would have you believe that the oil rally is over. They will soon be proven wrong once again, but that is a story for another day.   Given the strong run up the pull back that oil experienced was minor in nature, and crude oil has put in a bottom. From low to high, crude oil almost tacked on 100% in gains.

We were expecting it to pull back to the 40.00 ranges with a possible overshoot to the $39.00 ranges; it traded as low as $39.19 before reversing course.  As far as we are concerned, the oil correction is over, and it is getting ready to trend higher. Moreover, it appears that the Dow is once again following in its footsteps as illustrated in the above chart. In this instance, the Dow bottomed early than oil. After dropping down to the 18,300 ranges, the Dow reversed course and soared to new highs. Potentially it could still test the 17,800 ranges; former resistance turned into support, before attempting to trade past 19,000.

The consolidation in oil appears to be over and given their relationship, the Dow together with Crude oil could be gearing up to trade to new highs.  Ideally, (but it is not necessary) the Dow would test the 17,800-18,000 ranges before making a break for 19,000. Thus all sharp pullbacks should be viewed as buying opportunities

“The art of acceptance is the art of making someone who has just done you a small favor wish that he might have done you a greater one.” ~ Russell Lynes