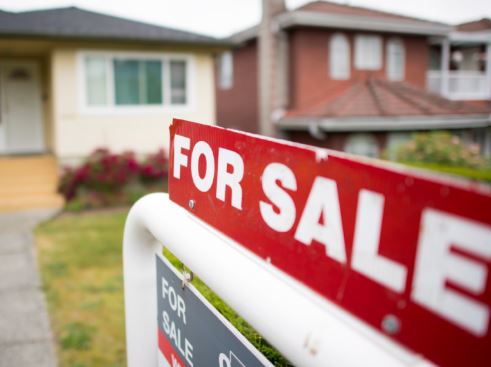 Highs sale numbers and increased prices come as a relief to many homeowners looking to exit the Greater Vancouver market during September 2020. Entry level markets have seen near term highs in prices while the higher end market has begun sell albeit at much lower than expected prices. The beginning of the school year had a major imprint to the 2020 Real Estate Vancouver market. As the colossal impact of the Covid-19th dust continues to settle, we anticipate less ferocious purchasing going forward, as the pent up demand has seemingly been relinquished with the return of the school year.

Diving into the data, the completed sales did occur in higher volume, many of which were for multi million dollars. The high end of the market was very active this month with seemingly money flowing from weak hands to strong ones. A property was listed for 13.388 Million in 2019, cancelled early in 2020 and then relisted during May at 12.998 Million the sale just was achieved at 9.85Million a cool loss of 3.538 Million dollars. Another seller who achieved a sale had been waiting for more than one year. A property that had been on the market for 533 days just sold for 4.7Million, a nice sale price however, the original ask was 6.88 Million in 2018 then 5.68Million during 2019. The eventual sale price was 2.18 Million less than the asking price during 2018. Even while these sellers were bent over the proverbial barrel the high end sales enabled the average sales price to increase to just over 1.7 Million. 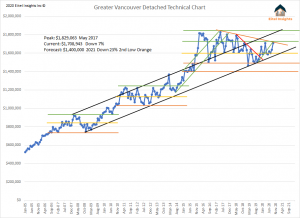 Technically speaking, current prices are testing both the long term downtrend and the low end of the upper echelon in the current market cycle. A triple top indicates a market reversal. That triple top occurred over the course of 2016 -2017. That triple top began the overall downtrend orange line that has forced prices lower and ultimately to test the long term uptrend indicated by the black uptrend lines on the chart. Due to the triple top prices did break below the upper channel of the long term up trend during 2019 which sent prices to the upper end of the low echelon. Eitel Insights believes the triple top and subsequent downtrend will again test the prolonged uptrend and eventually break the trend, which will force prices to retest the low end of the market cycle.

The Real Estate Board has been reminding everyone how well sales during September 2020 are doing compared with September 2019, they conveniently leave out that compared to the overall peak (peak price 1.830 Million), prices are still down 7% along with lower sale numbers. Eitel Insights had indicated over the past year or more, any property can sell, however at continually lower levels until the market bottoms likely in 2021 for most areas across Greater Vancouver. The many examples of current homeowners having to chase the market lower will ultimately push prices to retest the prolonged uptrend. 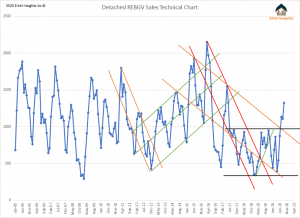 Going forward we believe the demand will dissipate, as that rush to buy land before the school year was a major factor in the recent bump to sales data. The Covid-19 reaction had families moving from condos to a detached property which caused a spike in completed sales. The sales total which is taken from the amount of completions at land titles accumulated to 1325 which is the highest over the previous 3 years. 2020 has changed the way many people work and how youngsters are learning. If a hard second shut down was to occur parents would become teachers again. The desire for the kids to have a back yard to play in has massively increased. With parents knowing this year mattered more than past or even upcoming years we believe that is what drove the completions during September to be the high water market of the current sales cycle. As time wears on Eitel Insights does not believe this type of intense demand will keep up. 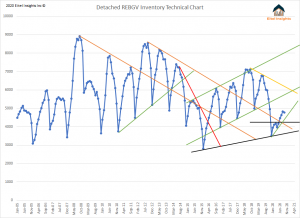 The Detached inventory has remained low during 2020 and is still lower than December 2018 data with only 4773 active properties. Contrast that with the Condo market hitting the highest new monthly listings in the past 15 years and the contrast of the two market becomes obvious. The rapid demand for a back yard from young families surely gobbled up many of the newly listed properties. 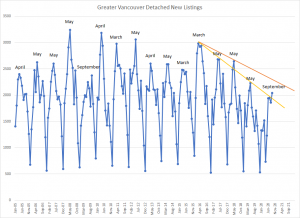 The overall inventory did not increase for the first time in the past several months, however the new monthly listings hit the highest since in over a year with 2042 newly activated detached listings. As suggested in months past the seasonal norms will likely not hold true for the remainder of 2020.

The previous yearly high water market for new active listings has always occurred before May each and every year except for 2009 and now again, here in 2020. The major difference between now and then…. No 2010 Vancouver Olympics around to corner to ensure construction and the actual economy doesn’t stop, rather than a couple governments offering meager handouts in order to be re-elected.

The effects of the Covid-19 impact is still percolating in the real economy. While yes, offering free money to everyone, whether previously employed or not, is a boon to the economy at the beginning. Longer term, this will mean more taxes. An unwelcome thought for business owners who are already struggling to keep their doors open. Secondary properties are hitting the market in droves already, as the condo inventory hits the highest point in the past 5 years.

In summary, September was a nice bump higher and ideally sellers took advantage, but ultimately, this great data point, in hindsight, will be seen as nothing more than a lower high on the way to the bottom.