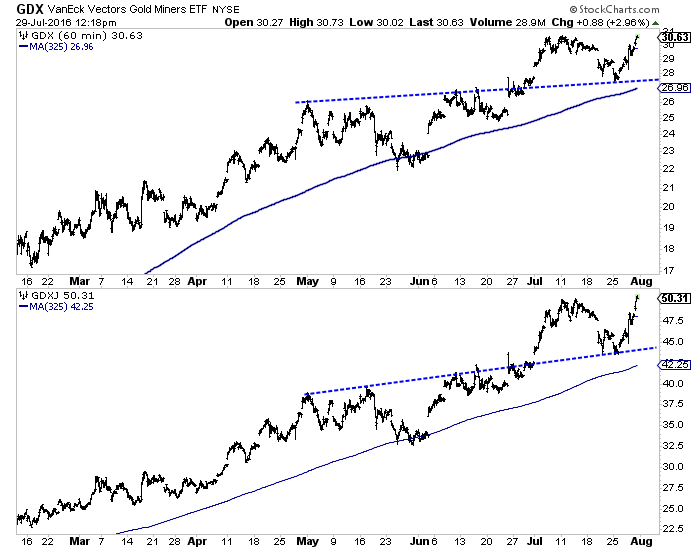 In a bull market corrections can end quickly. One minute you are projecting another 5-10% downside and the next, the market has left lower prices in the dust. A negative reaction to the Federal Reserve statement could have caused lower prices but instead Gold and gold stocks are now primed for new highs. Fundamentally, we know the Fed will do nothing to prevent real rates from remaining negative. Since the trend has turned, Gold and gold stocks have mostly ignored the moronic, empty drivel emanating from these supposed geniuses. Moreover, despite reports of increased potential for a rate hike in September, weakness in precious metals abated and buyers returned.

The hourly chart below reveals that the correction in the gold stocks was simply a retest of the July breakout from the upward sloping reverse head and shoulders pattern (in May and June). The strong rebound over the past few days allows us to deem the retest successful. The weekly chart shows the same retest but also how the correction served as a retest of the breakout past the 2014 highs. The arrows mark the 2014 highs and the earlier low of this week. Our minimum downside targets were GDX $27 and GDXJ $41-$42. GDX touched $27 while GDXJ’s low came at $43. Gold has also successfully retested its breakout. We thought it could come back to a minimum of $1300 and as low as $1280. Gold bottomed at $1310 this week and is set to close the week and the month well above $1330-$1335 resistance. Moreover, the strength in the miners since Wednesday reinforces that Gold will likely follow.

Summing it up, the correction is over and Gold and gold stocks could threaten new highs in August. A few weeks of consolidation near recent highs would not be bearish though. There are just too many people on the sidelines waiting to get in this market. They have been fooled by the CoT, the US Dollar rally or the meme that miners have gained too much too fast and need a big correction. Our views are always subject to change but we continue to see Gold reaching $1500-$1550 before any counter trend move. That implies plenty more gains in the miners in the weeks and months to come.