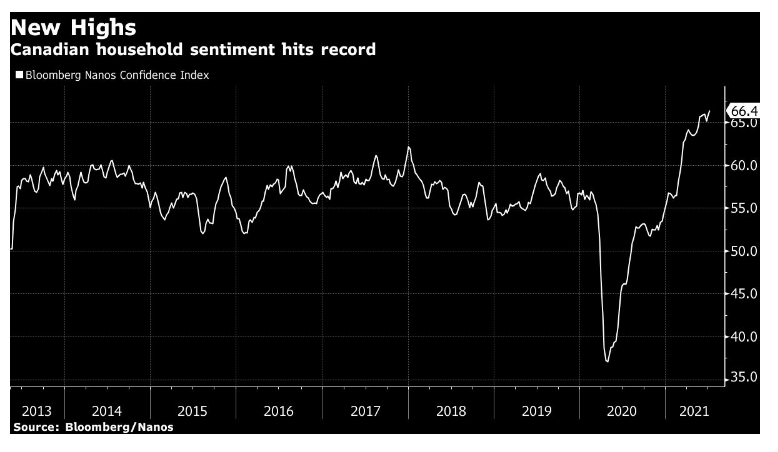 Canadians are entering the second half of the year more confident about their economic prospects than they’ve ever been.

Consumer sentiment marched higher to a new record last week, according to polling by Nanos Research Group for Bloomberg News, driven by optimism about the outlook for the economy and growing job security.

The numbers will stoke confidence among economists and policy makers that households will be in a spending mood as pandemic restrictions are lifted, particularly given Canadians are supported by a massive stock of savings accumulated during the crisis. After a rough patch in April and May during a spring surge of COVID-19 cases, the Canadian economy is seen rebounding sharply in coming months to pre-pandemic levels as consumers, and potentially businesses, ramp up spending.

The Bloomberg Nanos Canadian Confidence Index jumped to 66.4 last week, the highest reading since surveys began in 2008. The gauge has historically averaged around 56 and had never broken the 63 barrier until recently.

Separately, the Bank of Canada will release its latest quarterly survey of company managers at 10:30 a.m. Ottawa time, and economists anticipate business sentiment too has risen to near records.

Every week, Nanos Research surveys 250 Canadians for their views on personal finances, job security and their outlook for both the economy and real estate prices. The confidence index represents a rolling four-week average of about 1,000 responses…read more.