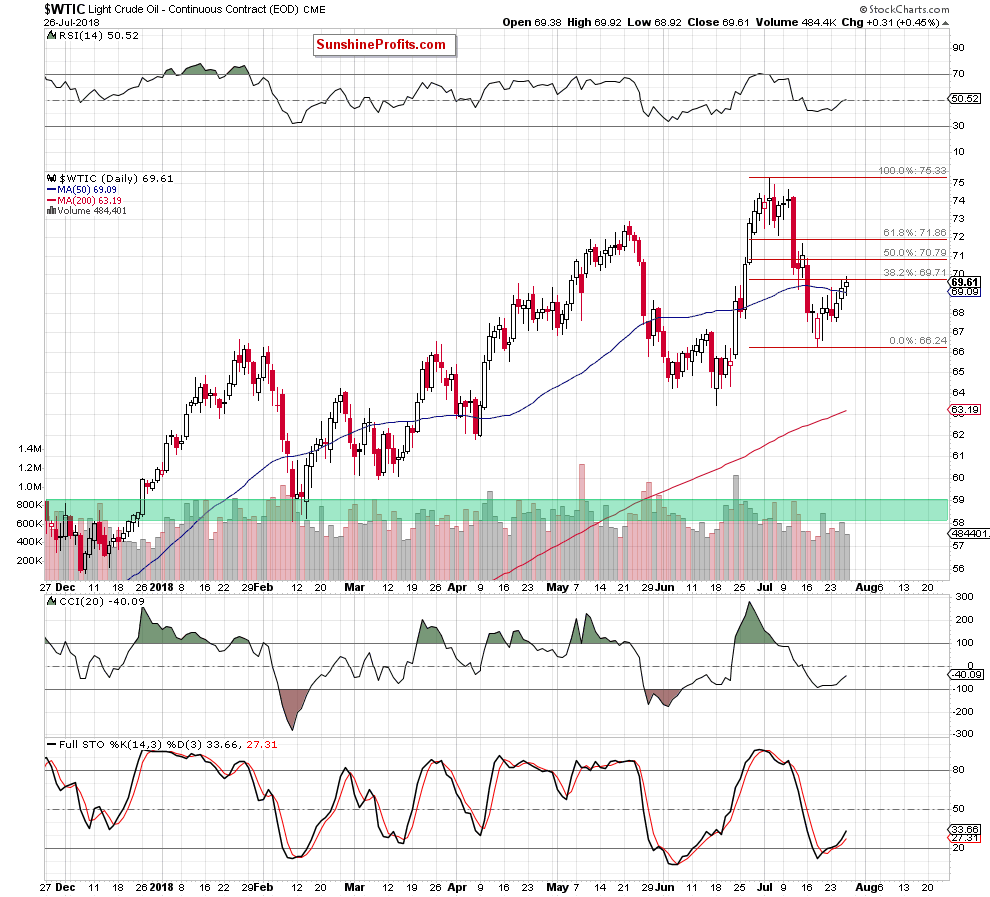 Recent days were good for oil bulls. Thanks to their action, the price of the commodity came back to around $70 and one of the daily indicators even generated a buy signal. Did the outlook turn to bullish? In our opinion, it didn’t. Furthermore, it seems that a fresh July low is still ahead of us. Why? The answer is quite simple – an analogy to the past.

Let’s take a closer look at the charts below (charts courtesy of http://stockcharts.com). Looking at the above chart, we could summarize it with only three words: nothing has changed. Why? Because although crude oil increased a bit, it is still trading under the 38.2% Fibonacci retracement.

Nevertheless, if we draw a few additional lines on this chart, mark technical formations invisible at first glance with their ranges and compare the current situation to something that we have already seen in the past, our chart will become much more interesting. See for yourself.

Were we right? We hope that the answer is yes. So, what can we read from the above chart about the future of black gold?

From this perspective, we clearly see that crude oil is trading inside a very short-term black rising trend channel, which reached the mentioned 38.2% Fibonacci retracement during yesterday’s session for the second time in a row.

What does it mean for the price of light crude?

Let’s start with a quote from yesterday’s alert:

(…) Despite this climb, this first resistance triggered a pullback, which suggests that as long as it remains in the cards higher prices of black gold are not likely to be seen and one more move to the downside should not surprise us in the coming days.

Additionally, yesterday’s upswing materialized on the smallest volume since July 18 (the beginning of the current rebound), which raises some concerns about the strength and condition of oil bulls – especially when we factor in another unsuccessful attempt to go above the 38.2% retracement.

Since we have already mentioned the very short-term black rising trend channel, let’s analyze it more closely. As you see on the daily chart, although crude oil extended its rebound in recent days, it is still trading inside this formation, which means that as long as there is no breakout above the upper line of the channel, further improvement is questionable.

At this point it is worth noting that we saw several unsuccessful breakouts in the narrower perspective. Let’s take a look at the 4-hour chart below.

As you see, although oil bulls pushed the price above the upper border of the channel in previous days, all these improvements were very temporary, which means that their opponents kept an eye on this important line.

Additionally, earlier today, the CCI and the Stochastic Oscillator generated the sell signals, increasing the likelihood of lower prices later in the day.

However, before we start talking about the downside targets, let’s go back to our technical formation and its implications.

On the daily chart, we see that entire July price action looks like a potential flag formation. The pattern started with a short-lived consolidation, then accelerated sharply on July 11 (that day the buyers had to cover their long-positions to avoid losses as more sellers came in off the fence) and rebounded slightly only to fall even lower in the following days.

In this way, oil bears formed the flagpole (marked with the first green rectangle), which is currently followed by an orderly rebound (the mentioned very short-term black rising trend channel), which forms the flag.

That sounds interesting, but what does this mean for oil?

For those who do not know yet, we explain that flags are continuation patterns. This means that if oil bears show their claws once again and manage to break below the lower border of the very short-term black trend channel, the next leg of the downside trend will begin, and we’ll see lower prices of crude oil.

What will be the initial downside target of the mentioned flag pattern?

Thanks to this method we see that crude oil could decline as far as to around $62 (the second green rectangle) to complete the whole formation. In this area, there is also the support zone created by April lows, which could attract oil bears like a magnet.

Nevertheless, to see black gold at this level, the sellers will have to break under the blue and red rising support lines (lower borders of the rising trend channels seen on the daily chart attached in yesterday’s alert) and the green support zone based not only on these lines, but also on June’s lows, which may not be a very easy challenge.

Why? At this point, the time has finally come to go back to the past.

Looking at the daily chart, we see that a similar price action to the one we are currently observing took place in the first half of June. Back then, the price of crude oil also bounced north (moving in a similar growth channel) after quite strong declines, and then fell to a fresh low. Despite that price action, oil bears didn’t manage to trigger further deterioration as the proximity to the red support line and the 61.8% retracement encouraged their opponents to act.

Taking the above into account, we believe that even if the sellers do not manage to push the commodity to around $62, we’ll see (at least) a fresh July low and a test of the nearest support zone (marked with green) in the coming week.

The pro-bearish scenario is also reinforced by two important negative developments seen more clearly from the broader perspective. Let’s examine the monthly chart below to find out what we mean by that. Looking at the above chart, we see that although crude oil bounced off the 200-month moving average earlier this month, the commodity remains under the previously-broken red resistance zone (created by the two important Fibonacci retracements) and the upper border of the green rising wedge.

This means that an invalidation of the earlier breakouts and its negative impact on the price of light crude are still in effect, suggesting that if we see a monthly close below the mentioned resistances oil bears will get one more important reason to push black gold lower in the coming month(s).

In our Wednesday Oil Trading Alert, we also focused on the relationship between crude oil and the general stock market. Has anything changed since then?

Not really, because although the oil-to-stocks ratio rebounded, it still remains under the previously-broken lower border of the green rising trend channel, which looks like a verification of the earlier breakdown.

Therefore, if the situation develops in tune with our assumptions and the ratio declines once again, we’ll likely also see lower prices of crude oil in the following days as a strong positive correlation between the commodity and the ratio is still in the cards. The pro-bearish scenario is also reinforced by the position of the indicators as the sell signals generated by the CCI and the Stochastic Oscillator continue to support the sellers.

Summing up, profitable short positions continue to be justified from the risk/reward perspective as the short-term outlook remains bearish (two unsuccessful attempts to break above the 38.2% Fibonacci retracement, a potential flag formation, similarity to the past, a potential invalidation of the breakouts seen from the long-term perspective, current situation in the oil-to-stocks ratio), favoring oil bears and lower prices of crude oil in the coming week(s).

If you enjoyed the above analysis and would like to receive daily premium follow-ups, we encourage you to sign up for our Oil Trading Alerts. Sign me up.