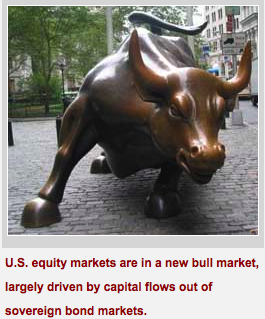 Equity markets are now in a long-term bull market, the likes of which has not been seen since the 1932 to 1937 period, when the Dow Jones Industrials soared nearly 382 percent — rallying from a low of 40.56 in July 1932 to a high of 195.59 in March 1937 — even though the global economy continued to sink deeper into a depression.

The thing is, only the savviest of investors will understand why, and profit from it.

They are investors who have open minds … who truly understand the lessons of the past … and aren’t afraid to think dynamically. If you’ve been following my work in my columns and in my Real Wealth Report, then you’re one of those savvy investors. You see, back in 1932, three years after the Crash of ’29, 17 countries in Europe started to default on their sovereign debt. Investors yanked their money out of Europe and sent it, guess where?

To the U.S. equity markets. They didn’t buy U.S. bonds because they were afraid that Washington would also have debt problems, even though the U.S. was a creditor nation at the time.

So investors bought up stocks like crazy, sending the Dow into a rocket ride higher.

The same thing is happening, again. Only this time, the flood of capital that could go into equities could be much bigger than it was in the 1932-37 period.

That’s because, this time around, it’s not just Europe’s sovereign debt that’s about to go under, it’s also the government debt markets in Japan and the U.S.

And just like the mid-1930s, it could happen regardless of what the economy does.

It’s a history lesson you need to heed, for two very important reasons:

First, because it’s one of the major ways you can make money over the next few years.

And second, because it’s a lesson about the Great Depression that almost no one tells you about: That stocks can soar even when the economy stinks to high heaven.

This is key to your future. Many investors will be refraining from buying stocks because the economy is not so hot, or because they’re waiting for the economy to drag down stocks, even precipitate a crash.

So they will miss the boat, entirely. Or worse, they will sell short stocks on the first pullback, thinking the markets are going to crash, and they will lose their shirts.

Not me, or my subscribers. As I said before, they’re in the camp of the open-minded … who heed the lessons of the past … and think dynamically. So they’re going to be ready to profit from it.

Right now, in the very short-term, stocks are indeed overbought and ripe for a pullback.

But based on the action thus far and my trading models, all U.S. equity markets are in a new bull market, one that will be largely driven by capital flows out of sovereign bond markets.

So if you think the rise since 2009 has been awesome, just wait: Once a short-term correction comes, the Dow will soar like an eagle and almost double in the next two years, or less!

What will be the best performing sectors going forward? They will be …

A. Natural resource stocks, once commodities bottom. More on that in a minute.

B. Multi-national companies and conglomerates.

Basically, companies with hard assets and multi-national revenues that will outlast governments.

What about commodities right now, gold and oil specifically, the top two markets most investors seem interested in?

Even the recent Swiss gold standard referendum failed to pass, another nail in gold’s coffin, one that will help gold fall to a major low in early 2015. Then, its new bull market will arrive.

As for oil, I had long expected oil to plunge to the mid-$60 level, and it has. Oil could move a tad lower, right along with gold, into the early part of next year. But then, oil should bottom, like gold, and begin a new bull market.

My Real Wealth Report will keep you up to date, with many flash alerts expected over the next several weeks and months, in addition to the regularly scheduled main issues. If you’re not a subscriber, consider joining now by clicking here.

For now, hold any inverse ETFs on gold and silver you may own, they are doing great!