Condo Prices are expected to drop until 2022 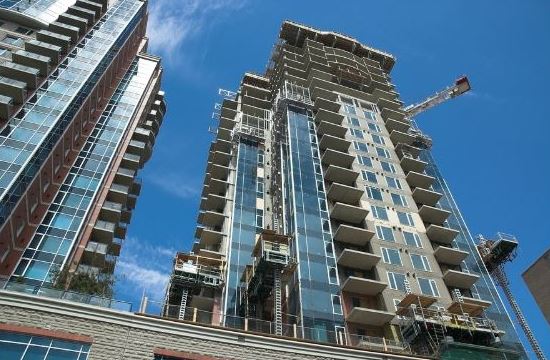 The condo market just gave back the 5% gain in the previous month. After months sitting inside of a 1% range the condo market made its move in March. Only problem, it was the wrong way. Prices had shot up to just $699K, one month later the Condo market has recognized its mistake has come back to the $661K pricing threshold.

No so coincidentally, at the price point where the market spent 6 months deciding whether to rise or fall. The resulting short lived retest to the upper echelon got optimists excited. The challenge, the move was a head fake. 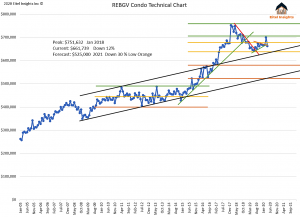 The technical feature of the divergent trend is over, next we forecast a prolonged downtrend of lower highs for the reaming months in 2020 and a further decline in 2021. Ultimately the Condo Market will test the $525,000 threshold, which hasn’t been seen since 2016. Signalling that 5 years of investment will have netted an investor zero increase of equity.

Investing in real estate is not for the feint of heart. I vividly recall in 2017 the line ups for presales and the amount of complaining that occurred from those who didn’t get a chance to purchase because some investor bought multiple units. Thank your lucky stars for those investors. Now it is them on the hook instead of you. In the upcoming months as those pre sold buildings are completed you can purchase that same unit at a discount. Crazy how life works out.

That being said we do not advise any investment purchases or even owner occupied purchases in the current market. We would prefer buyers wait until prices are much lower than $661K. Prices will continue lower as the inventory increases. Supply demand factors cannot be ignored.

As for the investor owners who are about to be caught in this chaotic market, our advice, sell in May and go away… for years. Wait until prices reach the lower echelon of the market cycle before re-entering the Greater Vancouver condo market. 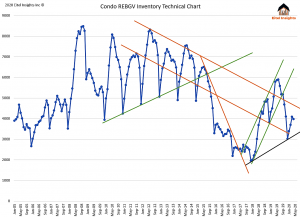 The inventory remained similar from the previous month. April finished with just under 4000 active condos for sale across the lower mainland. Over the next quarter we anticipate an additional 1000 active listings to join and remain on the market.

Age isn’t just a number, by that we mean elder buildings will have a tremendously hard time in the upcoming years. As the presale properties work their way onto market which will cause added competition, add the insurance concerns, and common sentiment to like a new shiny object. The resale market will be living the hard knock life. 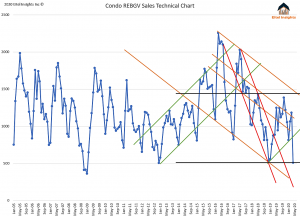 The April totals for condo sales across Greater Vancouver was 508. Marking the lowest April data on the record. April’s sales historically fall around 1100. The forecasts gets even worse, as we have stated in the past, sales numbers come from land titles meaning the recorded sales for April actually came from the previous months accepted offers.

The 508 April completions could have possibly come out of the accepted offers earlier in the year. January had over 900 accepted offers, February had over 1100 while March saw just under 1000. The gloom and doom of April 2020 only realized 257 accepted offers across all of Greater Vancouver. Buckle up condo owners it’s about to become a bumpy ride.