Historic government stimulus and mortgage deferrals not to mention the eviction ban has held prices buoyant in the intermediate, these stimuli’s are all coming to an end. Eitel Insights does not believe prices will hold their current level as the months continue to progress and the economic climate nationally, and locally worsens. 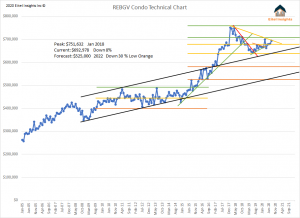 The Greater Vancouver price chart is testing the long term conservative downtrend which was initiated during the markets peak of January 2018. Prices during peak conditions were $751,000 current prices are $692,978 indicating an 8% decline from the peak. The current test of the downtrend is the second test in the past 6 months. During March 2020 the previous test of the downtrend resulted in a $38,000 price drop the following month. 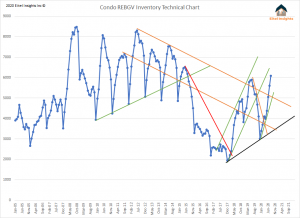 Inventory is the headline of the August market update. The Greater Vancouver condo market has just risen over 6000. The first time the inventory has been that high in over 5 years. Eitel Insights has warned that need based sellers would continue to force inventory levels higher.

The new normal has people working from home and the need to live downtown has diminished. This trend is likely continue, the old draws that had young working people moving to the city’s core are as gone, as the handshake. With businesses allowing more employees to work from home, no social gathering after work at the favourite watering hole, and no exciting weekends at the night clubs. These and more factors are leaving the downtown real estate market with a glut of inventory.

Lest we forget the upcoming onslaught of inventory that has been scheduled to complete during 2021, along with eviction bans being lifted and government stimulus to be rolled back. Eitel Insights forecasts the need to sell continuing to rise.

The rising need to sell is best exemplified through the new monthly listings, which once again was over 2900 new listings. Which marks the first time that has occurred in over a decade. What makes this data and chart interesting is the higher highs along with the higher lows over the previous 2 years. As technicians say the trend is your friend. Higher inventory out of a need to sell, will create intense competition amongst sellers of comparable units which inevitably leads to lower sales prices. 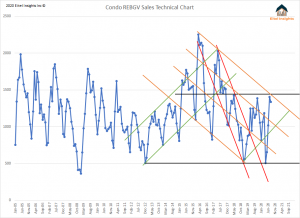 August sales of 1336 were lower than what occurred during July. The sales have remained inside of the Identified market cycle since 2017. With the August data concluded thus ends the seasonal hot market. Historically, April to August are the 5 hottest months of the year. During 2020 the sales over the 5 months averaged just 984. Some analysts and the Greater Vancouver Real Estate Board have touted 2020 as a great year simply because it was better than 2019. What a great year looked like was 2016 with the 5 months of hot selling season averaging over 1850 sales per month.

There was good reason for why sales did rise during the past two months. With the second wave of the Corona Virus long talked about, there was a rush for those who had a need to buy to do so, before a potential second shut down occurred. Another reason for the rush, is the extremely low interest rate environment. Now that the US Federal Reserve has stated there will not be any rise to the interest rates until inflation rises well above 2% for a sustained period of time. There earliest projection for accomplishing the 2% breakeven is 2023.

Eitel Insights does not see any reason to rush into the Greater Vancouver condo market especially as a strict investment. Location matters, but timing is everything. There are 20 markets which make up the Greater Vancouver data, and each area has its own velocity inside of their market cycles. Become and Eitel Insights client to find out which market trends are dominant in your neighbourhood.