COMPARE PRICES in $CAD and $USD for Single Family Detached Houses in Vancouver, Toronto and Calgary 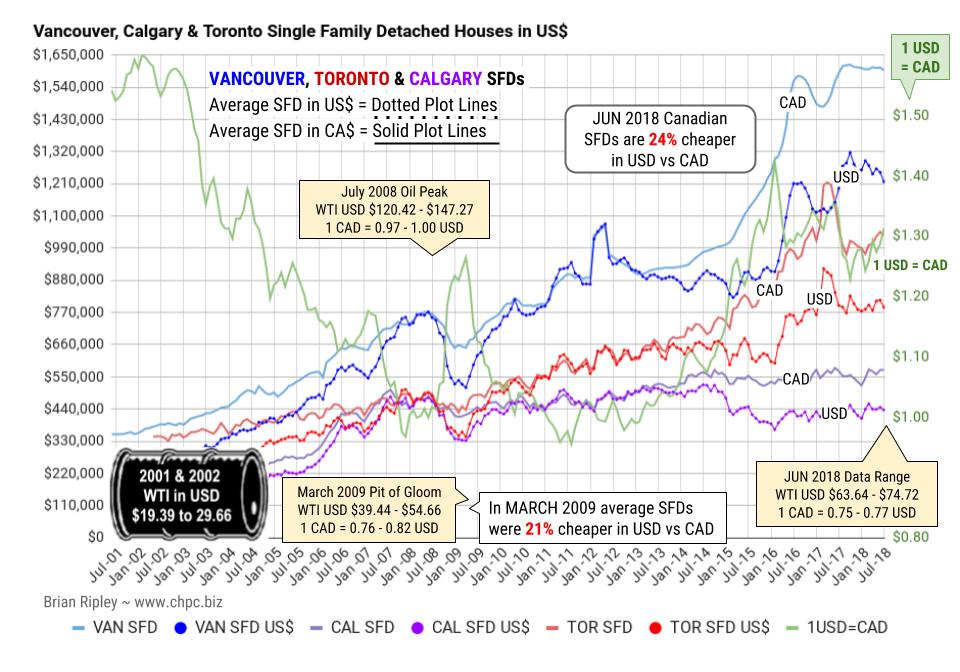 In June 2018 a single family dwelling in the hot metros of Vancouver, Calgary and Toronto is now 24% cheaper if purchased in USD as opposed to CAD. They were 28% cheaper in February 2016 and at the March 2009 Pit of Gloom, prices were 21% cheaper in USD.​

Clearly the run-a-way train that was housing price inflation was on the rails of energy price inflation that was set on course after the relatively benign two year period of 2001 and 2002 when the spot price of crude traded in a US$10 range between 20 and 30 bucks.

The ensuing commodity price spike blew out first in oil and housing in 2007-08 with the propellant of a low CAD exhausting itself at par at the 2008 peak. ​

Going into the March 2009 crash the FX spread widened to 21% cheaper Canadian housing in USD and then the tracks were replaced with slick new central bank high speed ZIRP rails and housing no longer needed to catch a ride on the commodity train but went air borne on a maglev of credit.

​On this hyper ride the CAD quickly accelerated and by the spring of 2010 only a year after the Pit of Gloom the world traded Canada at par with the US on energy and housing. But then the CRB Commodity Index priced in USD blew out in the spring of 2011 and then in the fall of 2013 spot oil reversed to the downside. The cyclical change in trend has been set.

​​Enthusiasts for Canadian housing denominated in CAD may have now come to realize that a switch has been thrown. ​Calgary housing values have been shunted onto a siding and the brakemen are now working in Toronto, and Vancouver. ​​​​​