Coming US Selling Bonanza Will Be Worse Than 2008 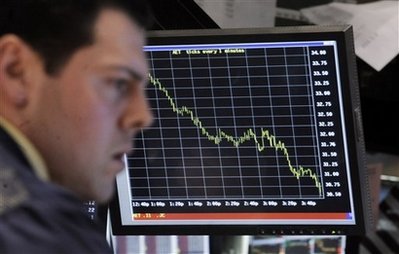 Schiff, who famously warned investors about the housing and financial crisis in his 2007 book Crash Proof, says the Fed’s palliative efforts during the housing meltdown have made the next crisis inevitable.

The picture Mr Schiff paints is depressingly clear and plausible. It might be different this time, then again probably not. Holding real assets like gold and silver and staying out of the US dollar are his main recommendations… (Ed Note: scroll Down for his Top 3 Recommendations).

According to Euro Pacific Capital‘s CEO Schiff, the U.S. economy is heading for an economic crash that will make 2008 look like a walk in the park. Stimulus programs can delay this day of reckoning, but only for so long and only at the expense of making the eventual meltdown much, much worse.

“We’ve got a much bigger collapse coming, and not just of the markets but of the economy,” Schiff says in the attached clip. “It’s like what you’re seeing in Europe right now, only worse.”

In this nightmare scenario detailed in The Real Crash: America’s Coming Bankruptcy, the current economic pause is actually the beginning of a material slowdown or recession into year end. At that point, the Federal Reserve will unleash a third round of Quantitative Easing — weakening the dollar without jump-starting the economy. As a result of dollar weakness, import prices rise, pressing the margins of corporate America. Lower margins lead to heavy layoffs, sending millions of workers into unemployment during a time when they can least afford it. Banks fail, housing collapses, and taxes are raised in a futile effort to give the tapped-out government the capital to try yet more futile stimulus.

“That’s when it really is going to get interesting, because that’s when we hit our real fiscal cliff, when we’re going to have to slash — and I mean slash — government spending,” says Schiff.

Those cuts will not be at all unlike the draconian austerity measures in Greece, with programs like Social Security and Medicare being dramatically cut or possibly disappearing entirely. The easiest way to put it, is that everything you don’t think could possibly happen in America will come to be.

“Alternatively, we can bail everybody out, pretend we can print our way out of a crisis, and, instead, we have runaway inflation, or hyper-inflation, which is going to be far worse than the collapse we would have if we did the right thing and just let everything implode,” he offers.

So what should investors do to protect themselves? Schiff has three suggestions:

1. Get Out of Treasuries

The U.S. dollar is going to get trashed in Schiff’s scenario. Locking in a yield on a government 10-year bond of 1.5% is a paltry return in the first place. Should inflation tick up to even 5%, a level much lower than that seen in the early 1980s, bond owners would have 3.5% less buying power at the end of every year. If they go to sell the bond, they’ll only find buyers at a much lower price than what they paid.

2. Own the Right Stocks

With bonds and the dollar bearing the brunt of the pain, Schiff says stocks will outperform dramatically, provided you own the right ones. Exporters and multi-national corporations will benefit from a weak dollar. Better still would be to buy foreign stocks and avoid the U.S. entirely.

Schiff says the recent weakness in these precious metals is just a pause as we wait for the other shoe to drop. Most of those on Main Street haven’t even taken positions yet in gold or silver. Once they start dropping bonds and looking for a place to hide, the price of these metals will soar.

Are you preparing for a major U.S. market and economic meltdown?