When QU3 Will Strike + Coming: The End of Fiat Money

Posted by Stephany Pomboy via Baaron's 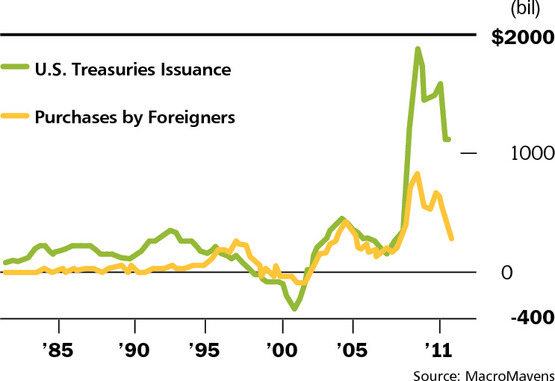 THE WORLD IS HURTLING TOWARD A DAY IN WHICH MONEY WILL AGAIN BE BACKED BY GOLD OR OTHER HARD ASSETS. UNTIL, THIS ANALYST SEES PLENTY OF TROUBLE.

“Hear Me Now, Believe Me Later,” was the title of two separate and prescient pieces penned by Pomboy, an economist and founder of the MacroMavens research boutique. One, published in March 2006, foretold the disastrous costs of the housing bubble. The second, somewhat later, laid out the consequences of the bubble’s “financial echo.” Today, Pomboy predicts something more draconian: the demise of fiat money—currencies that aren’t backed by anything other than government decrees that they have value.

We checked in with her last week, as central banks around the globe weighed more easing and as Fed chief Ben Bernanke described to Congress the headwinds facing the U.S. economy, including the automatic tax increases and spending cuts set for year end, called the “fiscal cliff.” With the Fed being the biggest buyer of Treasuries, Pomboy thinks the 40-year-old fiat system will crack within five years.

Pomboy: That the Fed will be a presence in the Treasury market for a long, long, long time. Some believe that, with another round of quantitative easing, we move forward, emerge from the morass, and the need for further intervention will dissipate. But the Fed is really the only natural buyer of Treasuries anymore. It will have to continue to monetize Treasury issuance at the same time all the other major developed economies—from the Bank of Japan to the Bank of England to the European Central Bank—are doing the same. Pursue that to its natural conclusion, and you see the inevitable demise of fiat money. To look at our policies and not be concerned about the risks to our currency would be dangerously naive.

One step at a time. When is the next round of QE?

….read her answer and much more HERE