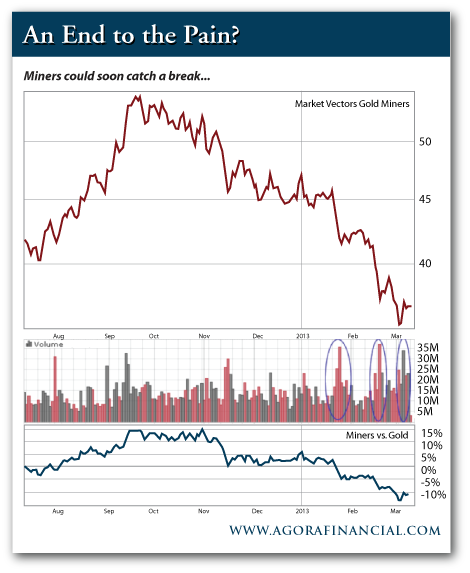 Mining stocks are having a no-good, horrible year. Prices of gold miners have fallen further and faster than physical gold in 2013, widening a performance gap nearly two years in the making. The Market Vectors Gold Miners ETF (NYSE:GDX) has shed more than 30% since mid-September. Over the same timeframe, spot gold has only dropped about 11%.

But that could all be changing soon.

Gold mining stocks are once again beginning to show subtle signs of life. And while price hasn’t risen too dramatically, other clues suggest the painful slump could finally end. Take a look at the sharp declines GDX posted in January and February. Both of these powerful downside moves were accompanied by big volume. Complete capitulation was on full display during the January breakdown below $45 and the February crack of $40. Sellers clearly wanted out at any price.

But just when everyone was ready to bury miners for good, signs of a potential bottom began to emerge. Last week, after holding about $36 for two straight days, GDX opened at its low–then surged higher. Strong volume rushed in, chasing the price back above $37. That’s the first time during this six month drop where strong volume has accompanied a move higher.

If you’re looking for long-term buying opportunities in mining stocks, watch for GDX to hold $37 as it consolidates last week’s move off its lows. Then, you’ll need price to confirm that a bottom is in place. Once GDX is back above $40, you’ll have a perfect low-risk entry point. Rude Trends: When to Buy… When to Sell

“I’ve been hearing that some pros are concerned because the ‘dumb money’ is rushing into the market, citing big inflows into stock ETFs and mutual funds,” writes an alert reader…

“However, two recent surveys on Yahoo! Finance caught my eye. One was last week as the Dow was knocking on the all-time high door. It was something like: with the market near all-time highs, what are you doing with your money?

“The other survey was maybe a month ago, with very similar results, 41% of responses were ‘still waiting to get in’…

These are obviously not scientific surveys, but very interesting if that many folks are still watching and waiting.”

It is interesting… and understandable.

Yes, a lot of new money rushed into stocks to start the year. But that’s nothing compared to the $250 billion investors pulled from stock funds since early 2009.

Most people don’t trust this market–as evidenced by all these surveys you’re seeing. And my guess is that a majority of armchair investors won’t become comfortable buyers until their more adventurous neighbors start making money in the markets again.

Despite the fact that this bull cycle we’re experiencing is now 4 years old, we can still safely say few believe in stocks right now. The lost decade continues to weigh on everyone’s mind…

So your question got me thinking…

Why don’t I conduct my own survey?

Tell me… what are you doing with your money now that the Dow is posting new highs? You don’t need to get too specific– just tell me what your plans are. Are you buying stocks? Bonds? Gold? Or are you a seller? Or maybe–like most others–you’re still waiting it out. Tell me here: rude@agorafinancial.com

Ignore At Your Own Peril: Today’s Must-Read Links