Close to the Bottom but Not There Yet 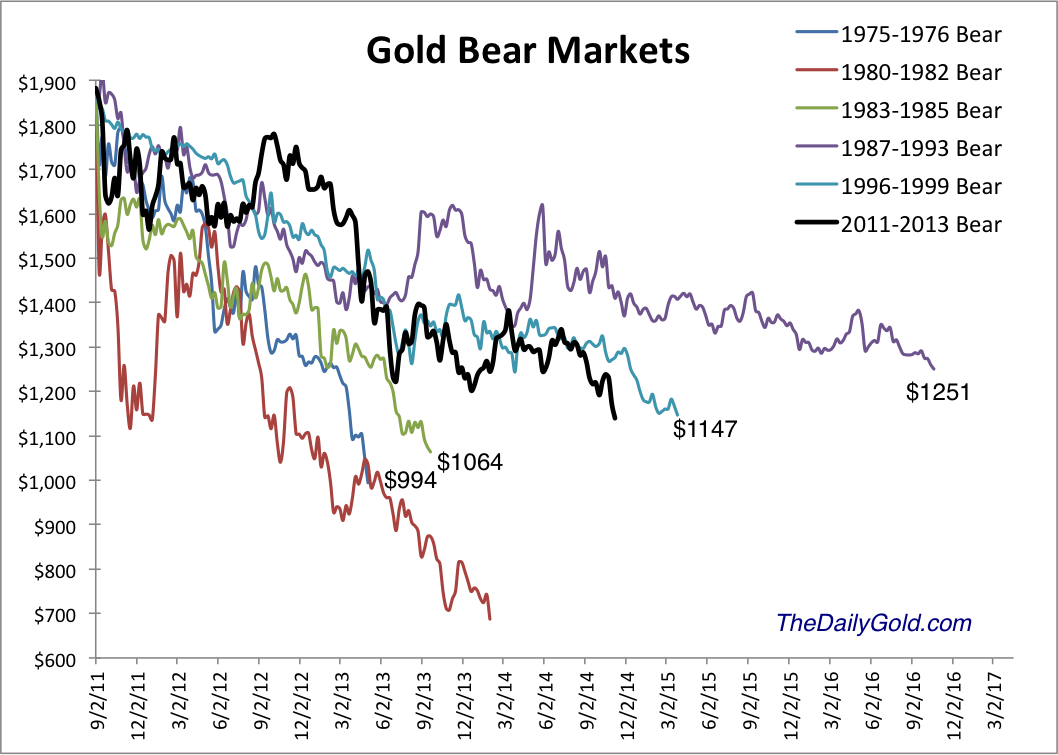 The selloff in precious metals intensified over the past week. GDXJ declined 25% in seven days while Gold plunged below $1180 to $1140 and Silver plunged below $16 and to as low as $15.20. Precious metals are becoming extremely oversold and the bear market is clearly in the 9th inning. Be on alert for a snapback rally to repair the extreme oversold conditions. Although we are likely very close to the bottom in the miners, Gold’s current position continues to leave me skeptical.

Below is the updated bear analog for Gold which uses weekly data. Gold has yet to suffer the extreme selling experienced by Silver and the mining stocks. It makes sense given that Gold peaked months after those assets. The chart illustrates how bear markets are a function of price and time. The most severe bears in price are the shortest in time while the longest bears in terms of time are the least severe in terms of price. This bear falls in between. Given that Gold went 10 years without a real bear market it makes sense that this bear could bottom very close to the 1983-1985 and 1975-1976 bears but will have lasted quite a bit longer. With respect to Gold, another point to consider is the strong supports at $1080/oz (50% retracement of the bull market) as well as $1000/oz. These downside targets continue to align well with the history depicted in the bear analog chart. Moreover, the fact that Gold currently sits well above these support levels is reason to expect more downside.

Silver on the other hand figures not to have the same degree of downside. Silver’s bear began five months before Gold’s and the bear analog below makes a strong case that the current bear will end very soon. Other than the epic collapse from 1980-1982, the current bear is the worst ever for Silver in terms of price and is the third worst in terms of time. Similar to Silver, the mining stocks which led the bear market are moving from very oversold to extremely oversold. The HUI Gold Bugs Index, shown below closed Wednesday at an 11-year low. As far as the HUI’s distance from its 50 and 200-day moving averages, it is inches from major extremes. Over the past 50 days the HUI has declined 36.4%. That is the second worst performance over the past 20 years. The picture is even worse for the junior mining sector. GDXJ has declined 43% over the past 50 days. It is trading at the lowest level relative to its 50-day moving average since the creation of the ETF. The worst bear market ever for the gold stocks was the more than four and a half year decline following the junior bubble in 1996. That bear did have a 14 month long respite where the indices rallied as much as much as 70% and 80%. That rally was longer and much larger than the one experienced recently. During the 1996-2000 bear, the GDM index (forerunner to GDX) declined 77.5%. Through Wednesday it was down 76%. The XAU declined 72.5%. Through Wednesday the XAU was off 74.2%. The Barron’s Gold Mining Index declined 75% during the late 1990s bear. Through last week it was down 68%.

The mining stocks and Silver are obviously extremely oversold and very close to the bottom. It could happen any day or any week. However, I’m skeptical because Gold is currently trading so far above its potential bottom. Sure, Gold figures to be the last to bottom but my view is the window for a bottom in the stocks could come when Gold declines below $1080. That being said, we could definitely see a snapback rally of some sort. The mining stocks and Silver are extremely oversold and could pop higher in the short-term.

In any event, the bear market is very close to its end. The weeks and months ahead figure to be very enticing and exciting for precious metals traders and investors. Expect quite a bit of volatilty as we see some forced liquidation from longtime bulls and as the sector tries to carve out a major bottom. Opportunities are fast approaching so pay attention. Be patient but be disciplined. As winter beckons, we could be looking at a lifetime buying opportunity. I am working hard to prepare subscribers. Consider learning more about our premium service including a report on our top 5 stocks to buy at the coming bottom.