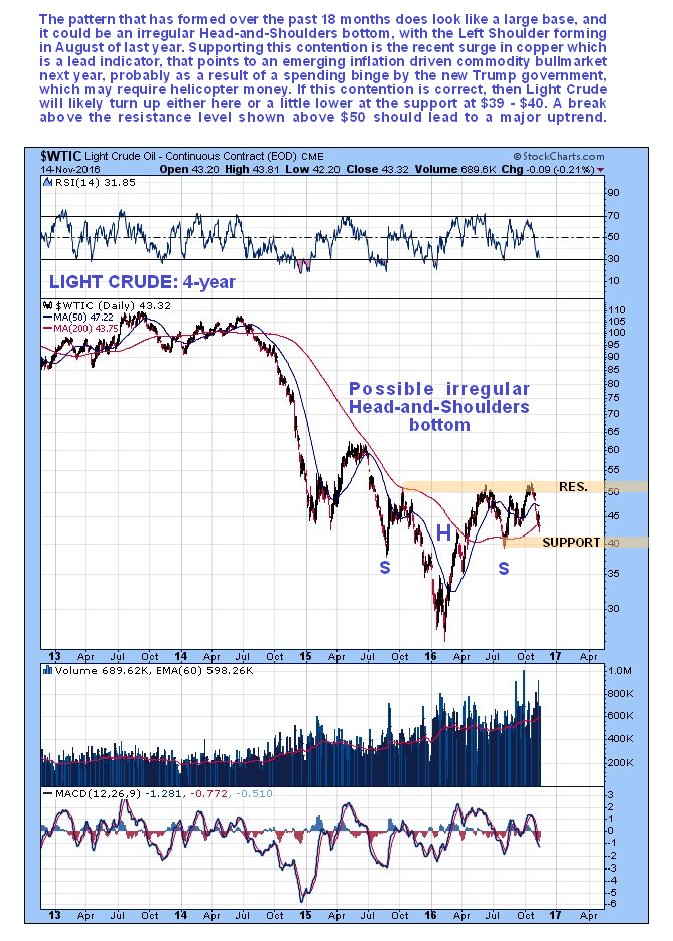 After the severe decline in the oil price in 2014 – 2015, which was partly motivated by the Neocon intention to crush the Russian economy as one prong of an asymmetrical warfare campaign that also involved sanctions and a military pressure, the price has marking out a potential base pattern since the middle of last year, as we can see on the 4-year chart for Light Crude shown below. The pattern is looking increasingly like an irregular Head-and-Shoulders bottom, and while it would obviously abort and the price break to lower levels in the event that a general market crash manifests, it is clear that the pattern has the potential to support a substantial bullmarket. This it is interesting to observe the strongly bullish action in copper over recent weeks, which points to a general commodity bullmarket taking hold next year, even if copper is short-term overbought and has signaled that it needs to take a breather. Whilst we can speculate about what may bring this on, it is clear that the election of Trump with his grandiose plans for rebuilding America is likely to be a big factor, although how he plans to finance all this is another matter – probably by means of “helicopter money”, which will mean increasing inflation and a commodity bullmarket, especially in gold and silver, that will also be positive for the oil price. For several months the price has been tracking sideways in a trading range bounded by the support and resistance shown, and right now it may be marking out a second Right Shoulder low of the prospective giant Head-and-Shoulders bottom. A clear breakout above the resistance at the top of this range will be a major technical event that will signal a new bullmarket in oil. ….continue reading more and view the charts on the Oil Market Update HERE