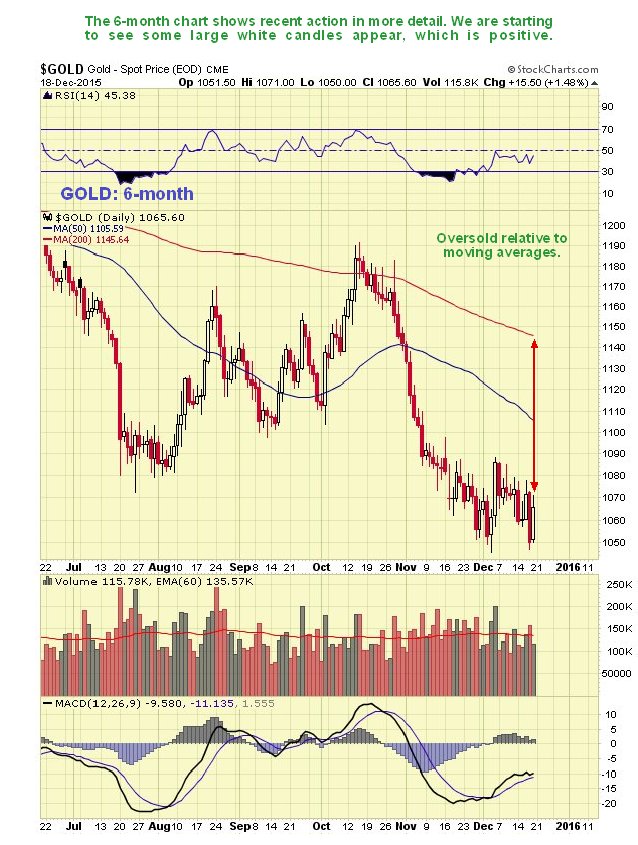 Gold’s technical picture is actually little changed from the last update posted on the 6th, apart from its having made marginal new lows late last week. What has changed is that we have since seen the Fed raise interest rates for the first time in many years, and the Junk Bond market has started to seriously fall apart.

With respect to the rise in interest rates there are two points to be made. The first is that, contrary to the general belief that gold is less attractive in an environment of rising rates because it doesn’t pay interest, it actually does well, because some of the money that floods out of the stockmarket flows into gold. Second, the Fed’s diminutive rate rise was a hollow face-saving measure, intended to salvage some credibility after it had been “crying wolf” for so long. It is too little and far too late. The time to raise rates is when the economy is strengthening and beginning a new growth cycle – what has happened here is that they are trying to raise rates at a time when an artificially induced recovery brought about by a tidal wave of money printing is already spluttering and running out of steam. The Fed, having been progressively cornered by their past misdeeds and gross excesses, are desperately trying to demonstrate that they are still in control when they no longer are. The market has got the ball now and will show them who’s boss by crashing the Junk Bond market, which is already happening, starving the stockmarket of buyback funds so that it collapses, with the result that the Fed has to make a groveling about face into NIRP and then embark on its final act of reckless abandon, QE4, at which point gold will take off like a rocket. So it is by no means guaranteed that the dollar will embark on another major upleg – if the market figures out that this is going to happen, the dollar could top out here.

Looking now at the charts, we will start with the 6-month chart which shows recent action in detail. On it we can see more clearly the new closing low on Thursday, and how some larger white candles are starting to appear on the chart, which is a positive.