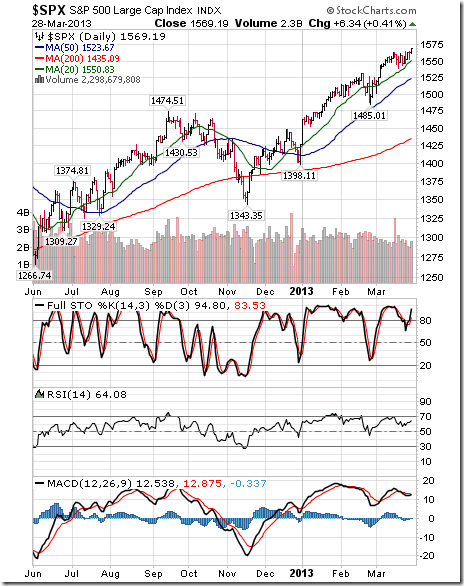 Key reversal sell signals for equity indices are rare. When they happen, they usually are a reliable indicator that equity markets are about to move lower in the short term. U.S. equity indices could easily fall back to break out levels that occurred on May 3rd when the last monthly employment report was released. Trigger for the key reversals was news that the Federal Reserve is considering the possibility of reducing the size of its Quantitative Easing program as early as June. That means the Federal Reserve will purchase fewer Treasuries and Mortgage Backed Securities. As expected bond prices also responded strongly to the downside on the news. The VIX Index spiked on the news. The U.S. Dollar move higher and the Canadian Dollar virtually collapsed on the news. Economic sensitive sectors were notably under pressure. Their performance relative to the S&P 500 Index has started to deteriorate, a typical seasonal pattern at this time of year. Note that all charts below also recorded negative key reversal patterns. Not all markets and sectors moved lower yesterday. Notable strength was recorded by the Russian ETF and the Grain ETN. The latter is being influenced by problems with planting the grain crop on a timely basis due to weather (cold spring, tornado season) Equityclock.com is offering free access to a data base showing seasonal studies on individual stocks and sectors. The data base holds seasonality studies on over 1000 big and moderate cap securities and indices. Notice that most of the seasonality charts have been updated recently.

To login, simply go to http://www.equityclock.com/charts/

Following is an example:
S5HOME INDEX Relative to the S&P 500