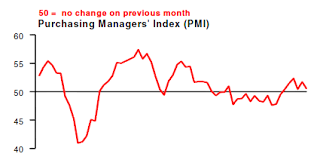 China’s stocks fell, dragging the benchmark index down the most in three weeks, as data showed the country’s manufacturing growing at a slower pace. As I have said on numerous occasions, China’s infrastructure build-out is both ridiculous and unsustainable. Yet that does not stop for one second the cheerleading.

It is really tough to spin that stagnation, assuming you even believe it (I don’t), into something positive. Hongbin Qu, Chief Economist, China & Co-Head of Asian Economic Research at HSBC managed to do just that.

Qu stated “The HSBC Flash China Manufacturing PMI came in at a two-month low, but still managed to expand modestly in April, albeit at a much slower pace. However, new export orders contracted after a temporary rebound in March, suggesting external demand for China’s exporters remains weak. Weaker overall demand has also started to weigh on employment in the manufacturing sector. Beijing is expected to respond strongly to sustain the economic recovery by increasing efforts to boost domestic investment and consumption in the coming months.”

Let’s at least be honest about this. At best China is stagnating and this is in spite of an unwarranted and unsustainable infrastructure build-out.

Mike Shedlock / Mish is a registered investment advisor representative for SitkaPacific Capital Management. Sitka Pacific is an asset management firm whose goal is strong performance and low volatility, regardless of market direction.

You are currently viewing my global economics blog which typically has commentary every day of the week. I am also a contributing “professor” on Minyanville, a community site focused on economic and financial education.

Bloomberg: Financial Blogs: The Best of the Bunch