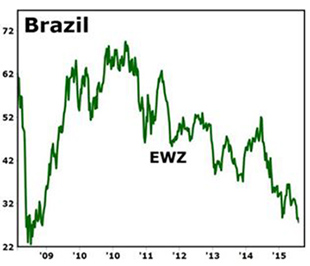 On Tuesday, China shocked financial markets by suddenly devaluing its currency, the yuan, by nearly 2%, which may not sound like much, but it is the biggest downward currency move in two decades.

The move caught most analysts completely off-guard, and it seems like a desperate attempt to fight back against the forces of global deflation and jump start China’s sagging economic growth.

But China’s surprise move could trigger unexpected consequences in global markets. Why now? Let’s quickly recap China’s motivation for doing this, and the potential risks to markets worldwide.

This is in keeping with Beijing’s long-term goal of opening up its financial markets and adopting a more flexible exchange rate. The U.S. and the IMF have insisted on this step as a prerequisite for the yuan to achieve parity with the dollar, euro, yen and other major currencies, which will pave the way for the yuan to be more widely used in global commerce.

But be careful what you wish for, because a flexible market-based exchange rate can’t be easily managed by the authorities in Beijing.

In fact, while the “official” adjustment by the PBOC was -1.9%, in offshore trading the currency tumbled even more, by -2.9% in value. That’s a strong sign the yuan could ultimately fall even further.

Sure enough, just one day after the official devaluation, the yuan sold off again Wednesday, forcing the PBOC to intervene and support the currency.

According to Bloomberg estimates, it will take a much larger depreciation in the yuan to significantly boost exports. Something more like a 10% drop in the currency’s value would be needed to restore China export growth to 10%. That’s a monster move.

The risk is that a sliding Chinese currency triggers massive money flows out of China, just as we’ve seen with capital flight from Europe as the euro declined. This could deal another blow to China’s struggling stock market.

Why they did what they did

The reasons why China made this move now are not really a surprise. They are two-fold:

First, deflation still has the upper hand in the global economy, as my colleague Larry Edelson has frequently pointed out. China’s economy has been slowing for years, from double-digit GDP growth not so long ago, to Beijing’s current official growth target of just 7%. But China’s economy will be lucky to expand even that much. After plenty of disappointing data recently, the current real-time estimate for China’s GDP this year is down to 6.6% and falling fast. Exports, China’s life-blood, plunged by 8.9% year over year in July.

China is desperately trying to grow its economy by any means possible: internally using fiscal and monetary stimulus, and now externally through currency depreciation.

Second, by explicitly devaluing its currency, China is taking a well-worn page out of the central bank playbook. The PBOC is simply pushing back against currency depreciation by the Fed, Bank of England, European Central Bank, Bank of Japan, etc. over the last several years.

In other words, the PBOC is just trying to keep up with the competition.

In fact, China’s currency has appreciated significantly in recent years compared to the dollar, euro and yen. The yuan’s real effective exchange rate has climbed 13% over the last 12 months alone.

And that’s not all. China’s emerging Asian neighbors and biggest trading partners — including Taiwan, South Korea, Malaysia, Singapore and more — have been busy depreciating their own currencies for years, at the expense of China. Now it’s payback time!

Even if you argue China is somewhat justified by making this move, it could not have come at a worse time for global financial markets.

Now investors have another, in a growing list of risk factors to lose sleep over.

First, China’s devaluation could spark another battle in the ongoing global currency war. The South Korean won along with the Singapore and Taiwan dollar also tumbled this week in response to the weaker yuan.

So it’s clear that foreign-exchange markets are already pricing in more weakness to come. China’s move could trigger a vicious cycle of other countries trying to push their own currencies lower still. Former IMF economist and Morgan Stanley currency expert Steven Jen says “the emerging-market currency weakening trend is now going global.” He believes emerging market currencies from Brazil to Indonesia could be vulnerable to a decline of 30% to 50%.

So, the risk of another 1997-style Asian currency crisis playing out is clearly on the rise.

Second, China is also playing a very dangerous game with its own economy and still fragile financial markets.

The Bank for International Settlements estimates that dollar borrowing in China has expanded five-fold since 2008 to more than $1.1 trillion today.

According to Bloomberg, Chinese companies have $529 billion in dollar- and euro-denominated debt, which means their cost of servicing that debt just increased by $10 billion thanks to the PBOC.

And much of this dollar denominated debt may be unhedged, because up until Tuesday, the PBOC had kept the yuan in a narrow trading band against the buck. Bloomberg reports that: “Chinese property developers have lots of offshore debt outstanding — more than 20% of their total debt for some — and the majority of them have high leverage.”

In other words, China is walking a very fine line trying to boost its economy, while avoiding a major domestic credit crunch and market meltdown if the yuan falls too far too fast.

Bottom line: buckle your seatbelts because if financial markets weren’t turbulent enough for you already, China just upped the ante for investors.

Mike Burnick, who has over 25 years of professional investment experience, is the editor of the Ultimate Stock Options newsletter and associate editor and trader of Martin’s Ultimate Portfolio.

Mike has been a Registered Investment Adviser and portfolio manager responsible for the day-to-day operations of a mutual fund. He also held the position of investment research analyst and Director of Research for Weiss Capital Management, where he assisted with trading and asset-allocation responsibilities for a $5 million ETF portfolio.