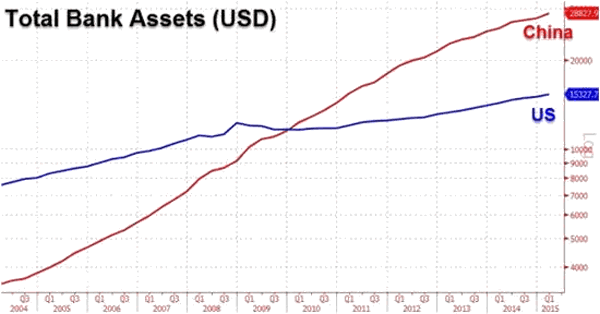 The whole “market economy” thing is turning out to be a little trickier than China’s dictators expected. To set up the story: After the 2008 crash the country borrowed about $15 trillion (an amount that dwarfs the US Fed’s quantitative easing programs) and spent the proceeds on history’s biggest infrastructure program. This pushed up the prices of iron ore, oil, copper, etc., igniting a global commodities boom. Then China liberalized its stock trading rules, setting off a stampede into local equities that doubled prices in less than a year. The result is a classically unbalanced economy, with massive physical malinvestment, overpriced financial assets and way too much debt.

The inevitable crash began in June, and Beijing responded by tossing about 10% of GDP into equities to stop the bleeding. This worked, as such interventions tend to do, for a while. But last night it failed:

(Reuters) – Chinese shares slid more than 8 percent on Monday as an unprecedented government rescue plan to prop up valuations ran out of steam, throwing Beijing’s efforts to stave off a deeper crash into doubt.

Major indexes suffered their largest one-day drop since 2007, shattering three weeks of relative calm in China’s volatile stock markets since Beijing unleashed a barrage of support measures to arrest a slump that started in mid-June.

“The lesson from China’s last equity bubble is that, once sentiment has soured, policy interventions aimed at shoring up prices have only a short-lived effect,” wrote Capital Economics analysts in a research note reacting to the slide.

China’s market gyrations have stoked fears among global investors about the broader health of the world’s second biggest economy, hitting prices of growth-sensitive commodities such as copper, which fell on Monday to not far from a 6-year low.

While the prices of commodities and equities have been bouncing around, China’s currency, the yuan, has been relatively stable in US dollars, because the government pegs the former to the latter. But because the dollar is way up against virtually every other currency, so is the yuan, which is a major cause of today’s crisis. Other things being equal, a rising currency makes exports more expensive and slows growth, and China’s trade has responded exactly as theory predicts: So here’s the dilemma: A too-strong currency is making it impossible for China to service its excessive debts, which is contributing to a bear market in equities, which further slows the economy and makes it even harder to service debts, and so on.

This probably seems like uncharted territory to the central planners, but is actually a pretty standard problem — for which the traditional solution is to devalue and stiff your creditors by repaying debts with cheaper currency. The US did it in the 1970s, Europe is doing it now with the euro’s recent steep decline, and much of Latin America is in various, mostly disorderly, stages of the process.

Put another way, the world is following the standard currency war script, in which countries take turns devaluing, reap modest temporary benefits, and then give up those gains when their trading partners respond in kind. China’s coming devaluation, however, will be a much bigger deal than most.