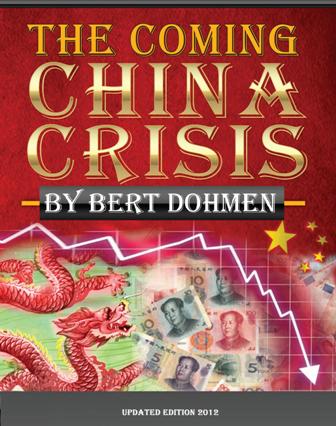 Credit is the lifeblood of any economy.

When credit tightens, either because of intent by a central bank, or through market forces, the economy goes into recession…or worse.

China’s money supply (M2) growth in May was up 15.8% compared to one year ago. Some economists say that since there is plenty of money growth, the credit crunch will be just “temporary.” We must point out that the growth of the money supply does not determine whether or not there is a credit crunch. The availability of credit depends on confidence and the willingness of lenders to lend.

Take the case of the US at the start of the 2007-2008 Credit Crisis: credit markets became totally frozen. The Commercial Paper (90-day corporate I.O.U.s) market froze and even large companies like GE couldn’t roll their paper on expiration. We saw this immediately as a crisis scenario, but amazingly no one in the financial media rang the alarm bells. That was the start of global crisis.

And what was US money supply growth at the time? Like China, it too was in the double-digits, rising from a 12% to a 15% growth rate by the end of 2007. In spite of this, the credit crisis intensified culminating in an Armageddon scenario in 2008.

During the last six months China has injected nearly $1.6 trillion in new credit (21% of GDP) into the economy. If there can be a credit crunch even with that much credit being added to the system, then you know that the problems are big.

Currently, China has a serious credit crisis. No private borrowers can get a loan, regardless of creditworthiness.

Our advice at this time:  BEWARE!

Will a China Credit Crisis infect the Global Markets?

The week of June 17, 2013 had some very important clues for what is ahead for the markets. The Federal Reserve had a two day meeting. The statement of the Fed after the meeting, and the press conference of Fed chief Ben Bernanke were widely misinterpreted in our opinion. The markets tumbled. Does this create a buying opportunity or is it a warning sign?

Our June 21 issue of our CHINA BOOM-BUST ANALYST present the results of our work and our predictions. These will be very, very important for your investment portfolio. Here is an excerpt:

China has the largest credit bubble in the world. We have tracked the private sector credit in China for the past several years. It’s a parabolic curve, and as market observers know, parabolic moves eventually collapse. We discussed this in our e-book, THE COMING CHINA CRISIS (150 pages) one year ago. It was greeted with great disbelief, similar to our book written in 2007, PRELUDE TO MELTDOWN, which predicted that 2008 would see a potential meltdown in the US system. Very few people believed it and the financial media ignored it.

On June 20 the global markets were shaken by the big overnight surge in short-term interest rates in China. The SHIBOR rate (similar to the short-term LIBOR interest rate in the western world) soared to over 11% overnight. The overnight repo rate soared over 25%.

The markets are sending an important message. What is really behind the market turmoil of the week of June 17? You will get Bert Dohmen’s interpretation in the CHINA ANALYST as well as the other services we offer.

China is extremely important for all business leaders and investors, whether you ever intend to invest in China (which we don’t) or not. You may ask, “why should you spend your valuable time reading about China if you have no intention of trading or investing in the country?”

Because whatever happens to China will tremendously influence the world economy and your investments. Many large US and European companies depend on China for a significant portion of their sales and profits. These companies are household names. A crisis in China will have global repercussion. You can stay ahead of the crowd by being knowledgeable about what is happening in China, not what the media is telling you about China. Amazingly, 99% of all analysts still believe the fiction of 7.5% GDP growth in China. Knowing the truth, our subscribers have been able to adjust their portfolio accordingly.

Being prepared for what’s ahead will help your portfolio thrive during this age of turmoil. For less than $31/month you can stay ahead of the crowd. The CHINA BOOM-BUST ANALYST is the most authoritative China research publication you can find at such a low cost. Go to:http://www.dohmencapital.com/ordernow.htm

Bert Dohmen did an important interview about China on Dec. 22, 2012. Judge
yourself if it was on target.
Here is the link: http://www.marketoracle.co.uk/Article38147.html