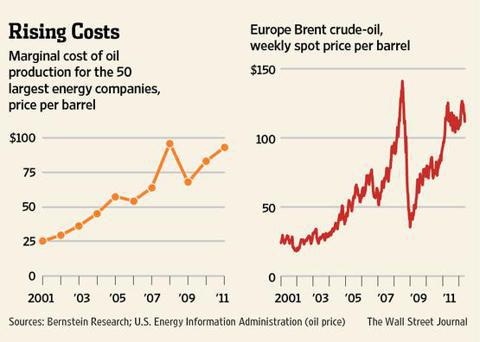 “Oil is absolutely certain to become incredibly short in supply and very high priced. The imported oil is not your enemy, it’s your friend. Every barrel that you use up that comes from somebody else is a barrel of your precious oil which you’re going to need to feed your people and maintain your civilization. And what responsible people do with a Confucian ethos is suffer now to benefit themselves and their families and their countrymen later. The way to do that is to go very slow in producing domestic oil and not mind at all if we pay prices that look ruinous for foreign oil.

The oil in the ground that you’re not producing is a national treasure … It’s not at all clear that there’s any substitute [for hydrocarbons]. When the hydrocarbons are gone, I don’t think the chemists are going to be able to just mix up a vat and create more hydrocarbons. It’s conceivable that they could, I suppose, but it’s not the way to bet. We should spend no attention to these silly economists and these silly politicians that tell us to become energy independent.

Let me pose a question for you. It’s 1930. Oil in the United States is in glut. We have cartels to get the price up to $0.50 a barrel. Everywhere we drill we find more oil in our own country; everywhere we drill in Arabia we find even more.

What would the correct policy of the United States have been in that time? Well, the correct policy would have been to issue $150 billion of very long-term bonds and cart 150 billion barrels of Middle Eastern oil into the United States and throw it into our salt caverns and leave it there untouched until the current age.
It’s easy to see that in retrospect, but who do you see who ever points this out? Zero. We have a brain-block on this issue. We should behave now to do on purpose what we did on accident then.” – Charlie Munger

According to Bernstein Research, that marginal cost of production influenced by tight, deepwater and oil sands production, is now in excess of $90 per barrel.