Challenging a long-held assumption about commodities 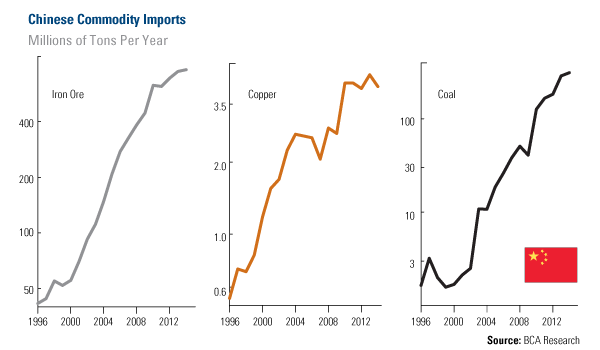 There’s no denying China’s massive economic growth over the past decade, as the country recorded an average GDP of more than 10% per year. In only seven years, China’s economy doubled; in 13 years, it tripled.

With this incredible expansion, China began to import commodities at an incredible pace. In 2000, the country imported only 70 million tons of iron ore; today, it’s more than 10 times that amount, at 763 million tons. Copper imports increased dramatically too, growing from 1.6 million tons in 2000 to more than 4 million tons per year today, according to BCA Research data.

And when it comes to oil demand, 17 years ago, China was a net exporter. Today, it is the second-largest importer, transporting 5.4 million barrels of oil into the country every day.

That’s why it is widely accepted that the Asian giant spurred higher commodity prices in the past decade.

And if the country was the force behind the boom, then the assumption is that China’s lower, but still healthy growth will be a drag on commodity prices.

But recent research challenges this assumption.

According to BCA Research’s Chen Zhao, what is initially an “outrageous proposition” may not actually be. The analyst says the fact that China’s consumption of industrial commodities significantly increased at the same time prices rose may have only created “the impression that China was the main driving force behind the commodities boom.”

Consider that since the substantial growth early in the last decade, China has continued to import commodities at a remarkable pace. Since 2007, the Asian giant buys 2 times more iron ore, 1.5 times more copper and 6 times more coal from other countries.