CDN Real Estate: Another Step Down 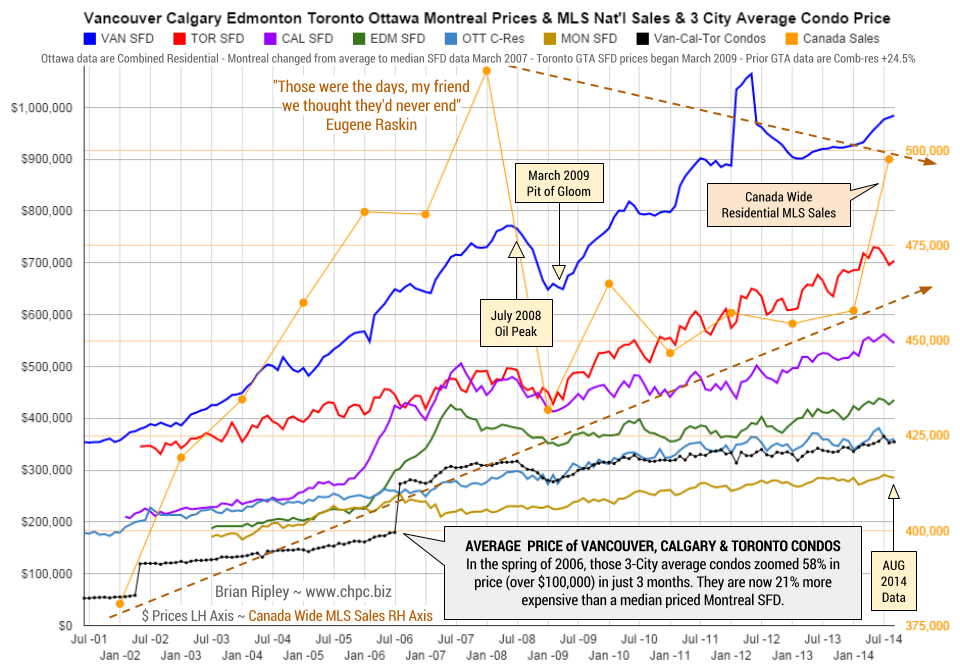 The Plunge-O-Meter tracks the dollar and percentage losses from the peak and projects when prices might findsupport. On the price chart in the spring of 2005 there was a 4-6 month plateau period while buyers and sellers twitched like a herd. When the credit spreads narrowed and the yield curve began its journey towards inversion, the commodity stampede began.
Ottawa data are Combined Residential (not SFD) and Montreal data are Median (not Average) *The Price Support target represents prices at March 2005; the start of a 40 month period of ardent speculation in all commodities; then a full blown crash into the pit of gloom (March 2009); and then another 39 month rocket ship to the moon but then the crowd suddenly thinned out in April 2012. The revival of spirits erupted in 2013 as globalmoney went short cash and long real estate on an inflation bet. See Whale Watching.

In case you have forgotten the depth and velocity of the previous market reversal when Canadian real estate prices plunged in 2007-2008 (chart); householder equity vanished as follows:

…occurred in March of 2000 and since then we have had serial bubbles globally (Financial Assets, Commodities & Real Estate). Prior to 2000, Japan and the USSR blew out in the late 1980’s and the Asian crisis occurred in the late 1990’s. More recently Argentina defaulted in 2001-02 and now European taxpayers are on the hook for public and private mal-investment. Commodities peaked July 2008 and the U.S. 7-10 year Treasury Bond prices peaked in May 2013.

Real estate has boomed and plunged in select markets with awesome volatility since the early 2000’s atop a huge edifice of debt that is only being propped up by the willingness of fewer and fewer buyers who think that prices will never collapse despite recent history being full of examples of the opposite (California, Florida, Detroit, Japan, Dubai, Greece, Ireland, Spain, etal).

Rising prices allow both the private and public sectors to over-leverage and with it comes speculative fervor that leads to prices rising further. But when prices decline then market sentiment changes and real estate becomes a slow moving asset class as debt revulsion sets in and fundamental illiquidity leads to asset re-pricing. At that point there is only one viable solution and that is for debt to be transformed into equity, and that occurs either by the debt being repaid slowly, or written off quickly.

In the sell-off phase, governments (who do not issue their own non-convertible currency eg: Greece, Spain and Italy, ie: members of the Eurozone) and corporations and individuals who defer repayment with more leverage (bailouts, bond issuance, secondary financing) are simply delaying the date of foreclosure, increasing the amount of potential asset destruction or lengthening the time and amount of repayment with valuable income streams that could have been used for productive investment (Canadians are producing more weapony and less infrastructure). Increasing debt leverage only works when prices are rising.

With respect to housing, there are much better mortgage models to follow than CMHC’s tax payer “insurance”. See the Danish Mortgage Finance Model where the combined loss ratio for all Danish mortgage credit institutions (MCIs) has never exceeded 1% in any one year – a number most other countries can only dream of.

A change in taxation policy is also needed. The way that government collects tax is highly inequitable. For an elegant solution see the APT (Automatic Payment Transaction) which would eliminate the tax complex. Gone would be personal, corporate, property, estate, capital gain, income, sales, excise and all manner of taxes or levies disguised as fees as well as the elimination of tax returns, deductions and special interest exemptions.

Implementation of this simple idea in Canada would allow Canadians to create an original, authentic social organization that would eventually be copied by all other nations. Let’s apply the power of the internet to build better housing, financing and taxation institutions. Canadians, write your Member of Parliament.