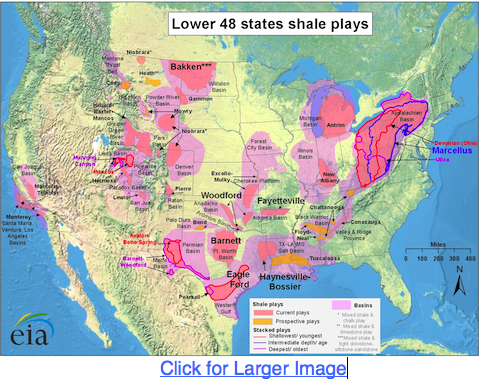 “Mining, processing, and pumping heavy oil sands from remote positions in Canada are much more costly than conventional oil and even shale oil in the U.S. While short-term operating costs are only around $40 per barrel, new projects need prices well above $90 per barrel to be in the money.”

U.S. oil production in the Eagle Ford, Bakken, and Permian could actually break even at just $60 per barrel

Much rides on the decision making of officials in Saudi Arabia with costs at only $25 per barrel. Background in following article – Money Talks Ed.

The number of active rigs drilling for oil and gas fell by their most in two months, according to the latest data from oil services firm Baker Hughes. There were 19 oil rigs that were removed from operation as of Oct. 17, compared to the prior week. There are now 1,590 active oil rigs, the lowest level in six weeks.

“Unless there’s a significant reversal in oil prices, we’re going to see continued declines in the rig count, especially those drilling for oil,” James Williams, president of WTRG Economics, told Fuel Fixin an interview. “We could easily see the oil rig count down 100 by the end of the year, or more.”

Baker Hughes CEO Martin Craighead predicted that U.S. drilling companies could begin to seriously start removing rigs from operation if prices drop to around $75 per barrel. Some of the more expensive shale regions will not be profitable at current prices. For example, the pricey Tuscaloosa shale in Louisiana breaks even at about $92 per barrel. But that also reflects the high costs of starting up a nascent shale region.

Much of the shale basins that are principally responsible for America’s oil production will not feel the effects of low prices as quickly as many are predicting.

Better-known shale formations, such as the Eagle Ford in South Texas, can break even at much lower prices. That’s because exploration companies have become familiar with the geology and fine-tuned drilling techniques to specific areas.

Productivity gains have allowed drillers to extract more oil for each rig it has in operation. For example, in North Dakota’s prolific Bakken formation, an average rig is producing over 530 barrels per day from a new well in October. Less than two years ago, that figure sat at around 300 barrels per day. Extracting more barrels from the same operation improves the economics of drilling, which means shale producers are not as vulnerable to lower prices as they used to be.

Another factor that could insulate U.S. oil production is that companies also factor in sunk costs. That is, if they have already poured in millions of dollars into purchasing land leases and securing permits, throwing in a little extra money to drill the prospect is probably the rational thing to do even at current prices. It is only projects in their infancy that may not be economically feasible.

Much rides on the decision making of officials in Saudi Arabia. Although exact calculations vary, the world’s only swing producer needs oil prices between $83 and $93 per barrel for its budget to break even. But that may not be as important of a metric as it appears. Saudi Arabia has an enormous stash of foreign exchange, and could run deficits for quite a while without too many problems. With average costs of oil production from wells in the Middle East sitting at only $25 per barrel, the Saudis can clearly wait out U.S. shale if they really want to.

But it may actually be Canada’s oil sands that end up being the first victim, the Wall Street Journal reports. Mining, processing, and pumping heavy oil sands from remote positions in Canada are much more costly than conventional oil and even shale oil in the U.S. While short-term operating costs are only around $40 per barrel, new projects need prices well above $90 per barrel to be in the money.

Rig counts are starting to drop, but due to the long lead time for most oil projects, it could be a while before production begins to decline in a significant way. What happens next will be largely determined by the outcome of the next OPEC meeting in Vienna on Nov. 27, where all eyes will be on Saudi Arabia.

By Nick Cunningham of Oilprice.com