Cryptocurrencies tumble, with bitcoin falling 10% and ether down 13%

Bitcoin fell about 10% and was trading near $38,330 on Friday, according to Coin Metrics. Ether, the second-largest cryptocurrency by market cap, dived more than 13% to $2,752.

The declines in cryptocurrencies follow Wall Street losses on Thursday. The Nasdaq Composite lost 7.3% this week, and the S&P 500 fell 5.7% for its third straight weekly decline.

The Federal Reserve have also indicated it plans to begin reducing its balance sheet, as well as tapering of bonds and raising interest rates…read more.

Bank Of Russia Calls For Ban On Crypto Mining And Trading

Like many governments, Russian financial regulators have had a complicated relationship with cryptocurrencies. Back in October, Russian leader Vladimir Putin praised cryptocurrencies as a possible tool to help dismantle the global dollar-based financial system.

That didn’t stop Russia from barring the use of cryptocurrencies for payment. And now the country’s financial regulators are pushing for a China-style ban on crypto mining, something that could disrupt the international network supporting popular cryptocurrencies like bitcoin and ethereum. In a report published Thursday, the Russian Central Bank called for a full ban on crypto. Its findings were presented during an online press conference led by Elizaveta Danilova, the director of the Bank of Russia’s Financial Stability Department.

The report claimed cryptocurrencies have become widely used in illegal activities like fraud (in the west, they have become closely associated with ransomware attacks like the one that shut down the Colonial Pipeline and JBS). Because of this, Russia needs new laws that would effectively ban any crypto-related activities in the country. This ban should apply to exchanges, over-the-counter trading and peer-to-peer trading, the report said.

The bank, therefore, suggests Russia needs new laws and regulations that effectively ban any crypto-related activities in the country. In particular, cryptocurrency issuance and organization of its circulation in Russia must be banned. The ban should apply to exchanges, over-the-counter trading desks and peer-to-peer platforms. Russian institutional investors should not be allowed to invest in crypto assets and no Russian financial organizations or infrastructure should be used for cryptocurrency transactions. And the existing ban on crypto payments should be more aggressively enforced…read more.

Bitcoin (BTC) hodlers face a crucial week in more ways than one as $42,000 rekindles a familiar battle.

As noted by on-chain analytics firm Glassnode on Monday, 30% of the BTC supply is now at a loss — historically, this has been a key number to defend for bulls.

Bitcoin’s descent from $69,000 to current levels — at one point over 40% — is nothing unusual, but for long-term investors, there is a specific reason to hope that current support holds.

Looking back at historical price performance, Glassnode reveals that once 30% of the supply goes “underwater,” price rebounds often occur.

“As the bears apply pressure to the in-profit cohort of holders, Bitcoin bulls are defending a historically significant level of the Percent of Supply in Profit metric,” staff explained in the latest edition of its weekly newsletter, “The Week On-Chain,” describing bulls as “under siege.”…read more. 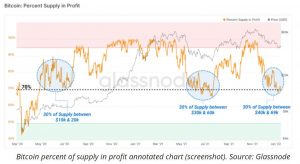 Bitcoin slumps to a three-month low as cryptocurrencies extend losses

The world’s largest cryptocurrency began falling earlier this week after the minutes from the Federal Reserve’s December meeting hinted the U.S. central bank would dial back its pandemic-era stimulus.

The hawkish comments triggered a sell-off in global stock markets which spilled over into cryptocurrencies. Bitcoin bulls often describe it as an asset that is uncorrelated to traditional financial markets, however experts have noticed growing parallels in the price movements of bitcoin and stocks.