Cash is on its Death Bed … 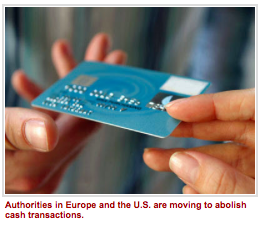 Last week, I told you how the smart money, the kind that moves first at the slightest sign of trouble, is on the move again.

There are numerous reasons why. Chief among them: The big, savvy and smart money knows what’s coming. Western socialist governments, on their death beds, are on a witch hunt to find every penny of wealth you have, track it, and tax it.

Some of you may think the rich deserve to be taxed more. Maybe so, maybe not. I’m not going to get into that debate today.

But what I am going to tell you is that if you think it’s only the rich under attack, think again.

Washington and Brussels want your money, too. They want to know how you’re earning it. Where it’s coming from. Where it’s going. Every penny of it.

They also want to control it. They want to get you to spend more to boost the economy. Hence, why negative interest rates, a tax on your money, is spreading through Europe.

Why JP Morgan is the first in the U.S. to impose negative interest rates on customer funds in excess of $250,000. Why more such policies are coming, yes, even here in the U.S.

And perhaps most important of all, why authorities in Europe and the U.S. are moving to abolish cash.

Never mind most of what you already do is electronic. You bank online. You trade online. You conduct business online.

That’s not enough for Washington or Brussels. They want all cash gone from the system. Think I’m kidding, or fear-mongering? Think again. I have long warned that the world was headed to a new, cashless monetary system and to a new reserve currency.

The first such steps have already been taken. The International Monetary Fund (IMF) is now working behind the scenes to make its Special Drawing Rights, or SDRs, the new global reserve currency.

The World Bank is working on its own version.

All over Europe now, cash is under attack. Spain has banned cash transactions over 2,500 euros. Italians have been banned from using cash transactions of more than 1,000 euros, while France is expected to introduce a similar law in September.

France, by the way, is also requiring that all gold in the country and transported through the country must be declared and reported to French customs.

While large cash withdrawals exceeding 10,000 euros per month will also now be monitored and reported.

Throughout Europe now, foreign exchange offices are now required to obtain a copy of someone’s ID to exchange more than 1,000 euros.

In the U.K., former Prime Minster Gordon Brown is advocating abolishing all cash and forcing people to use all electronic money via a new nationalized bank.

In effect, Brown wants to usurp the money supply and control it better, he thinks, via a communist-type move to control your savings and spending, allegedly on your behalf.

In Denmark, at least, authorities are being more open about it. They’re preparing to introduce a law this fall to make virtually all transactions electronic.

It’s not just Europe, though. In many Central and South American countries, finger-printing is required by certain stores and businesses if one pays in cash with US$100 or more. Western Union has certain policies in place that require finger-printing outside the U.S.

Here in the U.S., while there are no national cash bans in place, a new trend is indeed emerging.

In many states, pawn shops are now under very strict scrutiny when it comes to cash transactions, with a good deal of paper work now demanded.

Of course, the propaganda coming out of governments is that cash is how most terrorists and drug dealers work. Outlaw cash, and we put them out of business.

But you and I both know it goes well beyond terrorism and drugs. Just like the NSA spying has. It’s simply another way to spy on you, and to track and tax you — so the government can gain greater control over everything you do.

The problem is that it is going to get worse. Your rights are being trampled on, left and right. The Constitution means nothing these days.

But you have to stop and ask yourself one question: Why do governments want so much power over me these days to control and tax me?

The answer is simple: Western socialist governments are on their death bed, they are fighting for their lives, and if it’s a choice between them and you and your rights, they will always choose themselves.

In the end, they will fail. Governments can indeed fool some of the people some of the time, but over time, they can’t fool the majority. The people of the world, especially Europe and the U.S., will rise up and throw the bums out …

In one heck of a giant rebellion and revolution that is coming.