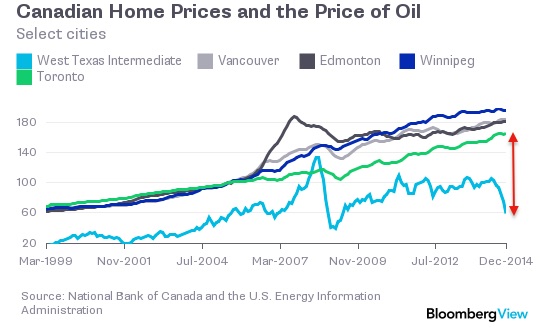 Don’t look now but slumping crude prices are hitting the Canadian housing market like a freight train. Energy accounts for 10% of Canadian GDP and around 25% of exports and the swift fall in oil prices is having a profound effect in the nation’s oil producing regions. Take Calgary for instance, where single-family home sales fell 34% last month. As the following chart shows, Alberta derives some 30% of its provincial revenues from energy royalties and as one TD analyst quoted by the Calgary Herald recently noted, “the effects of significantly lower oil prices had already turned up in resale activity, with sales in Calgary and Edmonton down more than 40 per cent and 30 per cent respectively, from October to January [and] as resale activity slows, prices usually follow.” …..full article & charts HERE

During a recent visit to Canada, (Mansharamani) “noticed a schizophrenic oscillation between housing exuberance and oil-price despair” and concluded that “Canada is now among the most vulnerable large economies in the world.”

Contributing to the impending burst bubble, according to Mansharamani, is rapidly rising household debt that far exceeds GDP, house prices that have continued their upward march, and the falling price of crude oil – all of which will be felt across the country.