Posted by Reuters via Globe and Mail 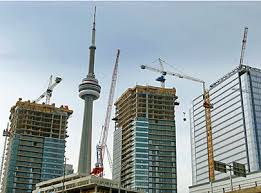 Canada’s economy shifted into lower gear in the second quarter and the economy contracted in the month of June for the first time in six months, partly affected by a Quebec construction strike and flooding in Alberta.

Gross domestic product grew by 1.7 per cent, annualized, in the quarter, Statistics Canada said on Friday, slowing from 2.2 per cent growth in the second quarter. Statscan revised down the second-quarter number from 2.5 per cent initially.