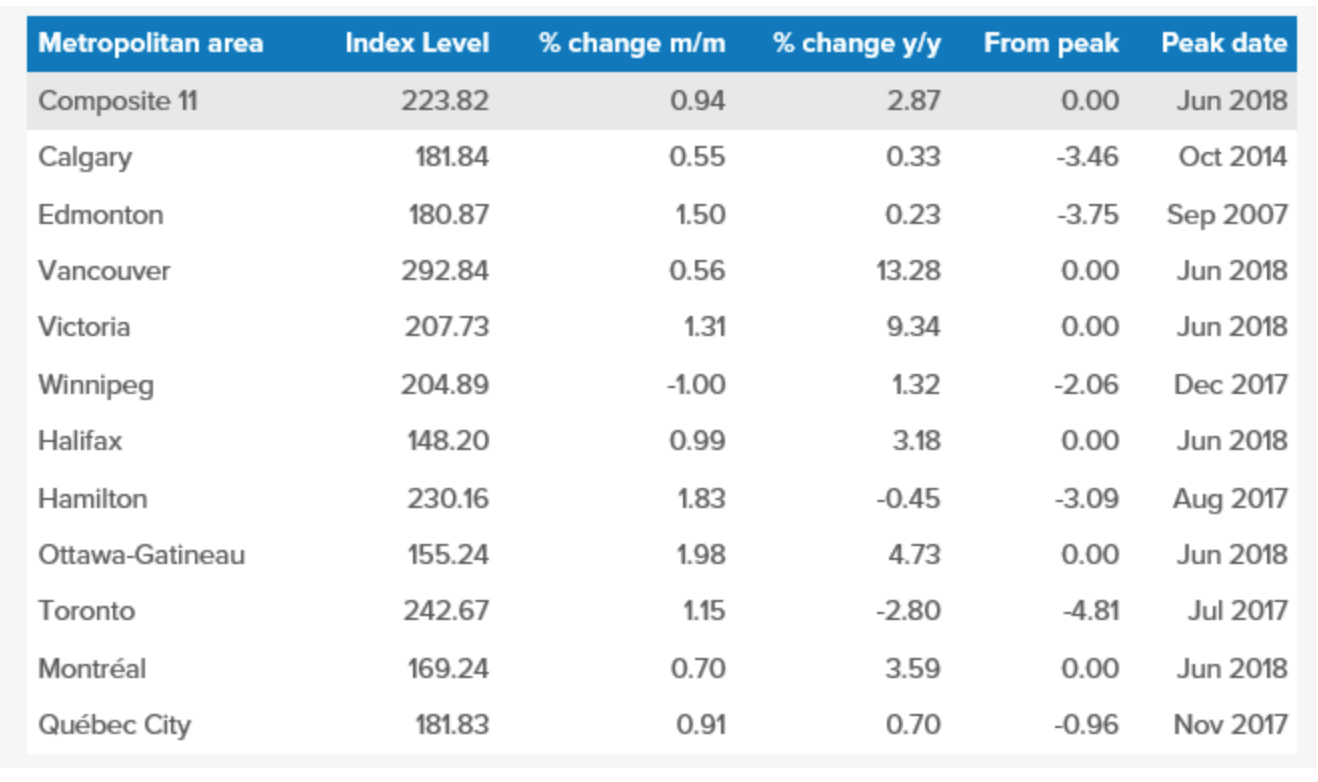 “Five of the 11 markets reached a new high in June: Vancouver, Victoria, Montreal, Halifax and Ottawa-Gatineau. The market furthest from its previous peak was Toronto, down 4.8% from its reading of last July…Over the first half of the year (2018) the Toronto index rose at an annual rate of 5.7%. For the condo segment, the rate was 12.1%, for other housing only 2.9%, reflecting a tight seller’s market for condos. The Vancouver story is similar: condo segment up 17.6% annualized since last September, other dwelling types up 4.9%.” (The Teranet–National Bank National House Price Index, July 12, 2018)

House prices in Toronto rose 1.2% in June, suggesting that some price stabilization was occurring in the country’s biggest city. The Toronto housing market (excluding condos) recently weakened after the provincial government adopted measures to rein in the market.  As well, tighter mortgage rules took effect at the start of 2018 which also hurt housing prices. The Toronto house price index is down 4.8% from its peak in July 2017.

On a year over year measurement basis, however, Canada’s housing prices have been clearly slowing, with the latest aggregate increase at just 2.9%, the lowest increase since October 2013.

A snapshot of housing prices over the past five years also confirms that a slowing pattern that has emerged.

Over the past five years, average housing prices in Canada have increased about 46%, with the peak rate of increase occurring around mid-2017. Since then, as the second chart illustrates, the average rate of house price increase has decelerated sharply from about 14% per year to less than 3% recently.

In sum, Canada’s recently hot housing market has softened in the wake of four interest rate hikes by the Bank of Canada since July 2017 and the imposition of tighter mortgage rules, though the condo markets in both Toronto and Vancouver have remained quite robust.

Tighter mortgage rules have priced many buyers out of the more expensive single-family home purchases.