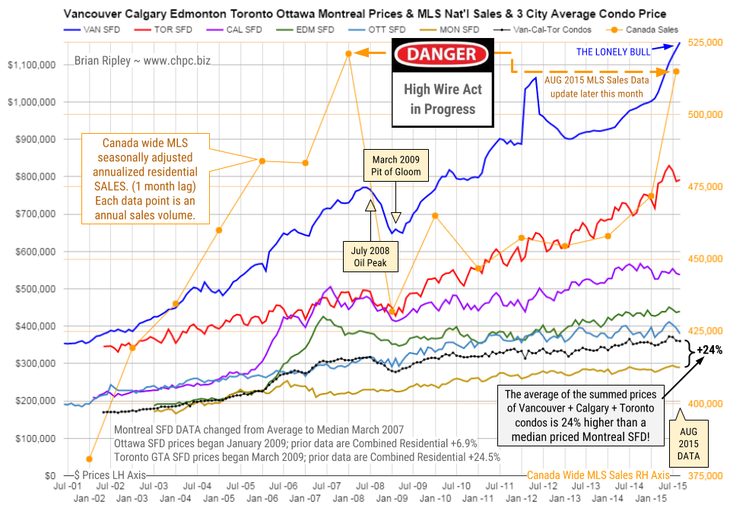 The chart above shows the average detached housing prices for Vancouver, Calgary, Edmonton, Toronto*, Ottawa* and Montréal* (the six Canadian cities with over a million people) as well as the average of the sum of Vancouver, Calgary and Toronto condo (apartment) prices on the left axis. On the right axis is the seasonally adjusted annualized rate (SAAR) of MLS® Residential Sales across Canada. The last data point is for July 2015, and will be updated probably in the second week of September.

In August 2015 Canada’s big city metro SFD prices folded under the weight of seasonality… except of course for the Vancouver bull that pushed buyers into hyperion skies.

Apparently it’s the dirt that inflames big money’s desire to pay a premium for sitting on it, not the least of which is refugee money (The Province August 3, 2015).

It’s too late for the the Canadian national MLS residential annualized housing sales data to break out above the 2007 peak; the season has shifted into the third quarter and sales are heading for their annual nadir.

High net worth trophy hunters have spent the last few years picking off well located SFD properties in hot markets while the hoi polloi settled for anything before being priced out.

Are they going to enjoy being priced in?

According to CMHC, August 13, 2015: “Low overall housing market risk is observed for Vancouver, as none of the individual risk factors are currently detected.”