Canada has recovered all of the roughly three million jobs lost to COVID-19.

The country’s economy added 157,100 jobs in September, returning the labor market to pre-pandemic levels, Statistics Canada said Friday in Ottawa. That compares with economists’ expectation of 60,000 new jobs, according to the median estimate in a Bloomberg survey.

The unemployment rate fell to 6.9 per cent from 7.1 per cent in August. Hours worked were up 1.1 per cent in the month but remain 1.5 per cent below their pre-pandemic level.

Bonds sold off, with the two-year benchmark yield at 0.651 per cent, the highest level since March 2020.

The robust numbers are a welcome sign for the nation’s economy. They suggest that companies are willing and able to hire workers as virus restrictions ease and as high vaccination rates boost optimism among consumers and businesses…read more. 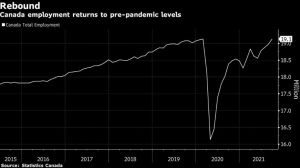