Canada and the Oil Price Shock 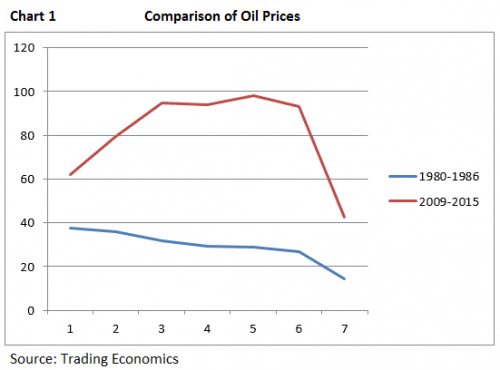 Canada is no stranger in dealing with oil price collapses. The sharp fall in the price of crude in 2014 is not unprecedented. Over the past 30 years, there have been five major declines in the price of crude that have hit world markets—starting dates: June 1986, October, 1990, October 1997, May 2002 and June 2008. The plunge in prices has ranged from 25% to 60%. In all cases, Canada, as an oil-exporting country has had to bear the brunt of these precipitous and severe price declines, in terms of loss production, loss income and downward adjustments in its exchange rate and balance of trade.

* A rapid and significant increase in supply; 1986 featured the full expansion from new fields in the Gulf of Mexico and in the North Sea; in 2014 the glut was caused by huge surge in production from unconventional sources such as oil shale in the U.S.

* A major shift in OPEC policy. In 1985, OPEC abandoned price targets and stepped up production by about 30%, the resulting low price remained in effect for nearly two decades; OPEC took a similar position in November 2014 by increasing supply and dropping prices to stem further losses in its market share; no longer will OPEC abide by price targets. * Worldwide a fall off in demand; in the early 1980s, the recession reduced demand and this contributed to lower oil prices. Today, oil demand has been slowing steadily since 2012, especially in the larger emerging markets.