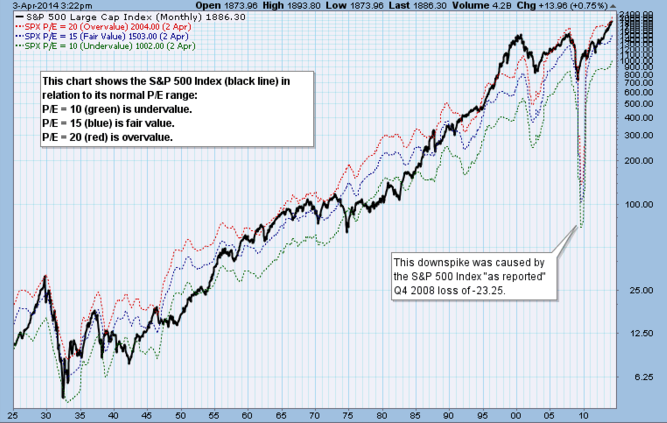 Remember, it’s just a matter of time until US stocks begin to fall. How much time? Darned if we know!

We spent Friday cosechando (harvesting). We were on our knees going through the vineyard at the family ranch, harvesting grapes. The going rate for such work is 5.70 Argentine pesos (or about $0.70) per gamela – the plastic bin we dragged along after us.

This was the first time we had ever worked as a grape picker. Experienced, hardy pickers can fill 40 gamelas a day, giving them about 230 pesos (or about $28) for the day’s work. Your editor worked at fast as he could. Still, he was only able to pick at the rate of nine gamelas a day. That gave him an income for the day of 51.30 pesos… or about $6.40.

The sun beat down. The grapes hid behind leaves and clung to vines, making it hard to cut them off. Our knees found every rock in the field. Still, we were proud to be doing honest work… and happy to earn some extra money.

Now, let us turn back to last week’s subject.

You’ll recall that the credit bubble must continue to expand. Or else all Hell will break loose. Civilization probably won’t be able to survive a real credit deflation, economist and author Richard Duncan believes. With visions of chaos, depression and war in his head, he advocates policies that give the bubble more air.

We live in a credit-driven economy. The money supply relies on banks creating new credit. Credit must expand… or the economy shrinks. It can’t stand still because the current level of jobs and incomes depends on additional debt.

Last year, for example, through its QE program the Fed created $1 trillion of new bank deposits (offsetting them with $1 trillion in new bank reserves). And the economy grew just 1.9% – or by only about $320 billion. Think what would have happened without this boost!

Not consumers. They don’t have the disposable incomes to support much additional borrowing.

And not corporations. Their earnings are beginning to turn down, too. The days of borrowing money in order to goose up their own stocks (and, not coincidentally, get management bigger bonuses) must be nearing an end.

Who does that leave? Government. Government is the only large entity with the ability (in theory at least) to borrow an infinite amount of money. Because it doesn’t have to worry about paying it back. It’s the only institution with the legal right to counterfeit its own money… and use this cash to pay its own debts.

What a sweet deal!

A World of Wonders

Duncan reckons that the US can, will and should follow the example given it by the Japanese.

Although the US has debt equal to about 100% of GDP, Japan’s government debt is about 240% of GDP. By that measure the US could borrow another $17 trillion – enough to keep the credit bubble and the economy expanding for many years.

You see, dear reader, we live in a world of wonders. One of them is that we have an economy that now lives, and apparently thrives, on air.

Each year, households, government and corporations spend their revenues…. and then some. This extra spending would normally come from savings. Instead, it comes out of thin air – conjured up by the Fed and the banking system.

Now, imagine that the air were cut off. You can see what a disaster it would be. Everyone would be gasping for cash… for credit… for a last breath.

So, the government stepped in as the borrower and big spender of last resort… allowing the Japanese government to run up record amounts of debt relative to the size of its economy.

But wait… With the government borrowing and spending so freely, didn’t prices go up? Didn’t inflation discourage people from lending to the government?

Nope. Prices were stable or actually fell. For two reasons. Because everyone else was paying down debt and reluctant to spend at all. And because wage competition from nearby China was substantially lowering the cost of consumer items.

So, with no threat from consumer price inflation, the government just kept borrowing and spending. This has held the Japanese economy together for 24 years. Many economists look at the Japanese example as a success story.

But the final chapter on that story still hasn’t been written. We will take a guess at how it turns out: badly.

Editor’s Note: Our new analyst, Braden Copeland, has put together a special report on what to do when the “thin air” economy finally falls apart. Learn about the three important steps you need to take to protect your wealth before, during and after the coming crisis by following this link.

From the desk of Chris Hunter, Editor-in-Chief, Bonner & Partners

Nobody knows for how long US stocks can continue to rally…

But a BIG headwind for the US stock market is overstretched valuations.

There are different ways to value stocks. But one of the most straightforward is to look at their price relative to their 12-month “as reported” earnings. (What’s also known as a “trailing P/E.”) And as you can see, the index is now at the top of its normal range.

Overstretched valuations like this don’t necessarily cause a crash. But they will make investors think twice about going long the S&P 500… and encourage more investors to take up short positions.

Meanwhile, the Wall Street consensus for earnings growth for Q1 has gone from 4.4% year over year in early January to -0.4% today.

If prices don’t fall, a drop in earnings will push up P/Es even higher… and create an even bigger headwind for US stocks.

P.S. Don’t forget to check out Braden’s new report on what to do to prepare for a crash in the US stocks. It contains a list of six stocks to buy when the next crash comes. Find full details here.