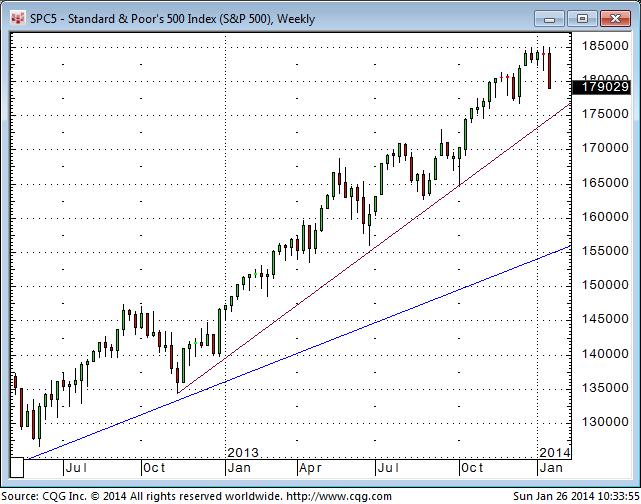 Buyer beware! This is not another “Buy The Dip” opportunity. Three weeks ago I wrote that the stock market was“Priced for Perfection” and at risk of a nasty correction. Last week I wrote that the Federal Reserve had “Rung A Bell” signaling a “Sea Change” in Market Psychology that would ripple across all assets. It was time to take profits and reduce leverage.
Well, here we go.

All stock markets…including the Emerging Markets rallied into Year-end 2013…from my perspective December was the “cherry on top” of the 5 year stock market rally…but Market Psychology has changed since the beginning of 2014…the Japanese market and the Emerging Markets have tumbled…New York has gone sideways while Canada and Europe have rallied…until last week.

Last week he DJIA was down 579 points (3.5%)…Transports were down over 300 points (4%) on Friday alone…the TSE fell 283 points (2%) from Thursday’s highs to Friday’s close…the Nikkei was down ~5% on the week…down ~8.5% YTD…the DAX hit All Time Highs mid-week and then fell ~400 points (4.2%) to Friday’s close. The iShares Emerging Markets ETF is down ~9% YTD. Several of the major stock market indices registered Weekly Key Reversals Down. I suspect that last week may have been a KEY TURN DATE (when Market Psychology makes a major turn across asset classes)…but it’s too early to tell.

The S+P 500: The red trend line on the chart below starts in November 2012 when the market figured out that Abe was going to win the election and begin to implement his policies to end two decades of deflation in Japan…It’s been my view that the weak Yen and strong stock markets were two sides of the same coin. A break below the December 2013 lows (~1768 on the cash S+P) and/or a break of the red trend line could signal a leg down to the blue trend line…which began at the 2009 lows. The Nikkei: The decline from the late December highs (which barely cleared the May 2012 highs before reversing) has come right back to the trend line off the Nov 2012 lows. The market broke hard last May/June (as the Yen bounced)…a bigger bounce in the Yen this time around would create a bigger tumble in the Nikkei. Japanese Yen: Huge short positions have been building against the Japanese Yen. If the Yen is indeed the other side of the strong stock market we could see a bigger short covering rally in the Yen than we saw in May/June 2013. US Treasury bond prices have soared since the beginning of the year (the yield on the 10 year has dropped from ~3.00% to ~2.70%) as capital seeks safety. Meanwhile “Junk Bonds”…which were bid aggressively higher as people “reached for yield” have collapsed. I have expected Treasuries to rally on a weak stock market…I have been skeptical of calls for the “collapse of the bond market.” However, a good rally in bonds may set up an opportunity to get short…but wait for it! Gold has rallied ~$90 from its Dec 31 lows…while copper has FALLEN from 3.42 to 3.26 in the same time period. It’s tempting to “see” a double bottom (June and December 2013) for gold…and gold may be making an important turn here…but as I wrote last week the better trade may be to buy gold against the stock market or other currencies…rather than against the USD. Copper: If the December breakout above the $3.40 level was a “false breakout” then prices could be headed for $3.00…or lower. Market Psychology has gone from “What, me worry?” to “Fear” very quickly.

The fear Index, the VIX had been trading at 7 year lows…it jumped last week to its highest weekly close since June 2013. A KEY TURN DATE may be developing across markets in January 2014…it “feels” like it’s been building for a couple of months…the “sea change” in Market Psychology across asset classes may be setting 2014 up for BIG moves…this is NOT another “buy the dip” opportunity.

Think of Market Psychology as a “Confidence” barometer…and remember that confidence waxes and wanes. When market participants are confident they become more aggressive in bidding markets higher. When they become “over-confident” they bid markets recklessly higher. When confidence wanes prices fall…with items that have been bid aggressively or recklessly higher falling the hardest.

Financial markets require confidence to sustain themselves. If confidence (in the government…in the currency) collapses, as it has in Zimbabwe, Venezuela or Argentina for instance, then prices don’t just fall they collapse.

PI Financial Corp. and its subsidiaries may, at their discretion, monitor and review the content of all email communications.