Buy When There’s Blood in the Streets…. 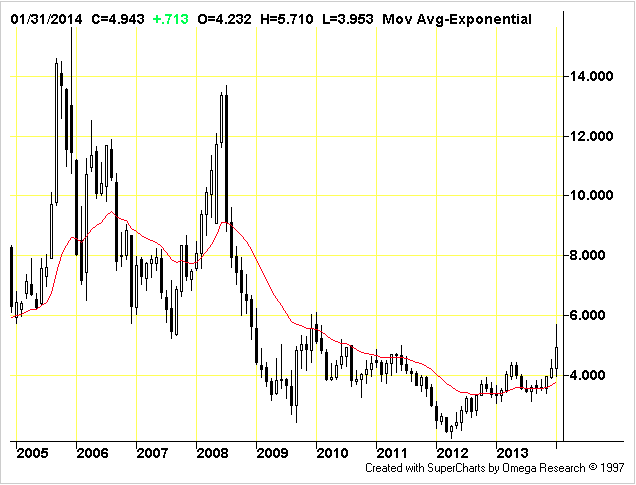 Ed Note: Baron Rothschild, an 18th century British nobleman and member of the Rothschild banking family, is credited with saying that “The time to buy is when there’s blood in the streets.”

He should know. Rothschild made a fortune buying in the panic that followed the Battle of Waterloo against Napoleon. But that’s not the whole story. The original quote is believed to be “Buy when there’s blood in the streets, even if the blood is your own.“

This is contrarian investing at its heart – the strongly-held belief that the worse things seem in the market, the better the opportunities are for profit.

While this analyst thinks that Natural Gas is not only sold out, but that the prospect for future growth are exceptional. We strongly recommend that you focus on the risk you are going to take. Whether it be extremely high risk highly leveraged commodity futures as this analyst recommends, or a Junior company with both high profit potential high risk attractive to the aggressive investor. And if futures are going to rise strongly, so to probably will the blue chip dividend paying more conservative investment – Money Talks

NatGas Futures Are Cheap, Buy On Dips Below This Level

The natural gas market is too complacent.

Anyone who’s been following energy markets is well aware that natural gas prices have been spiking. Just today they reached a fresh five-year high at $6.49/mmbtu before tumbling to last trade at $5.60.

But while the front-month natural gas futures contract have touched relatively lofty levels and seen extreme levels of volatility, that hasn’t been the case for longer-dated contracts. The March contract is down 10 percent today, but the April contract is down a little more than 5 percent. Even further out on the curve, the April 2015 contract is down a mere 1 percent.

The difference comes down to the weather. The 2013/14 winter has been especially brutal, and may turn out to be the coldest in decades when all is said and done. That’s led to a surge in heating demand and plunging inventory levels.

With supplies scarce and daily demand running at record levels, consumers of natural gas have had to bid up spot and front-month natural gas prices significantly. They need the gas now—during the cold—not later, when temperatures moderate and demand plummets.

This has created a massive backwardation in the natural gas futures market. Front-month natural gas for March delivery is trading at $5.60, but the second-month contract—for April delivery—is just below $4.80. Further out on the curve, some of the months in 2015 are even trading below $4. The market is essentially implying that this cold blast changes nothing from a longer-term perspective, and that prices will normalize at lower levels by 2015. The 2015 natural gas futures strip currently averages $4.18, up just slightly from where it was a year ago at $4.05.

That said, the market isn’t always “right.” As we wrote last week (see NatGas Supplies Fall To Critical Level; How Bulls & Bears See This), if production does not increase as much as anticipated; or a hot summer dampens injections; or inventories are not adequately filled ahead of next winter, then prices may spike again. In that case, natural gas for 2015 delivery may rise from an average of $4.18 to $5, $6 or even higher.

On the other hand, if the market is right, and inventories are easily refilled during the spring and summer months, prices still may not fall much from the $4.18 level.

Thus, we see a good risk/reward opportunity for deferred-month natural gas futures given the market’s complacency. We are buyers of natural gas below $4.50 for the front month, and below $4 for the 2015 strip.