Posted by Victor Adair for Moneytalks 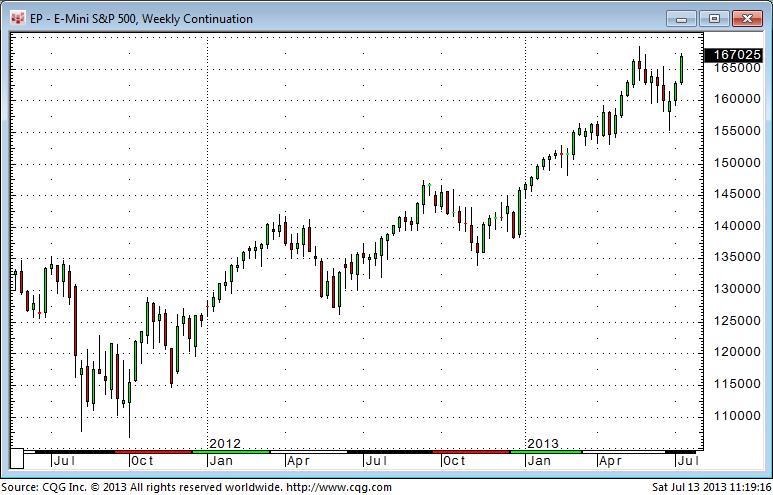 Market Psychology has taken a wild round trip since May 22…when  Bernanke first frightened the market with talk about tapering…to this past week when the major American stock indices closed at new All-Time-Highs. The US stock market was at All-Time-Highs May 22 before Bernanke’s tapering comments…it fell ~8% to the June 24 lows…as Market Psychology worried that the Fed was going to “take away the punch bowl”…but then it changed dramatically…tapering worries were thought to be “overdone”…and Fed spokesmen everywhere, including Bernanke himself, made the case that “accommodation” was going to continue…so…the market roared back with the Dow up nearly 1000 points in 12 trading days. Where do stocks go from here? Higher is the easy answer, but the bond market may be signaling caution.

It’s tempting to speculate why Bernanke “changed his tune.” On May 22 and again on June 19 he clearly gave the market a signal that the Fed was going to cut back on “accommodation”…but then on July 10 he gave a completely opposite signal.  Did he underestimate the impact his initial remarks would have on the market…or is this “give and take” part of a process to prepare the markets for inevitable cutbacks?

US Stock Market: I called May 22 a Key Turn Date…but as far as the US stock market is concerned May 22 was just a day when Market Psychology began a modest correction…the market had probably been “too bullish” after a 6 month run from the November 16, 2012 KTD and it needed a little correction and now…less than 2 months later…the correction has run its course and we’re back making new All-Time-Highs…the correction was obviously just another “Buy The Dip” opportunity, courtesy of your local Central Bank. But the US bond market tells a different story. Since May 22 bond prices have fallen to 2 year lows while the yield curve has steepened dramatically. Most of the time it’s a safe bet that the bond market is “smarter” than the stock market…and in this case bonds may see Fed tightening ahead…while stocks see clear sailing. Gold is now down over $100 since May 22…although it has rallied back $100 from the 3 year lows it hit at the end of June. ETF sales continue, but the large speculative short positions on Comex may provide fuel for a further rally. As noted in this blog 2 weeks ago I’m net long gold. WTI crude oil is up more than $10BBL from its May 22 levels…to its best levels in over a year. Obviously rising Mid-East geo-political risk has put a bid into the market…but is real demand also adding a bid…despite growing domestic supplies? I don’t know, but you’d have to be really well informed…or just plain “feeling lucky” to want to short a market that looks like this: The currency markets have been a puzzle. The US dollar Index was at 3 year highs on May 22 but then FELL (??) for 3 weeks as the markets believed that the Fed would begin to taper…the fall was mainly against the Euro while the US$ rallied against nearly all other currencies (there were huge short positions against the Euro and that may have accounted for its rally…and/or maybe European banks have been calling in overseas loans and repatriating capital home to shore up their balance sheets.)

On June 19 when Bernanke made his second “taper” comments the US$ soared against all currencies, including the Euro, with the US$ Index hitting new 3 year highs this week before Bernanke “sang a different tune” on July 10 and the US$ plunged against all currencies. This past week saw the US$ Index create a Weekly Key Reversal Down…following a Weekly Key Reversal Up 4 weeks ago…the currency markets are “choppy” on hourly, daily and weekly time frames! Yikes! But the Big Picture trend since the May 2, 2011 Key Turn Date has been up. What to make of it all? Two weeks ago I wrote that I expected the US stock market rebound from the June 24 lows to “peter out” and the market to roll over and make new lows…which would mean that the May 22 highs were indeed a Major Key Turn Date. HOWEVER, I also wrote that if the market was able to rally back through the June 19 highs (the date of Bernanke’s second taper scare) then new all-time-highs were likely to follow. (You have to respect the bullish momentum created as the US stock market rallied over 100% from its March 2009 lows.)

If Bernanke would have stayed consistent with his May 22 and June 19 signals during his July 10 Q+A session then I doubt that stocks would be making new highs…but he didn’t…and they are. Once again we have evidence that this market is trading on the anticipation of Central Bank policy…nothing much else matters.

For my short term trading accounts:

I have zero conviction as to where the US stock market goes from here. The market feels toppy to me…and even though Fed officials have stated that accommodation will continue it seems as though some tapering is inevitable. My currency theme remains that the US dollar gets stronger. My interest rate theme remains that we’ve seen the lows and higher rates lie ahead.  With respect to gold…I’m net long a small position of gold as of two weeks ago and still have that position. But it’s summer holiday time and I’m happy to be mostly in cash and on the sidelines…it’s more important to me to maintain my capital and my sanity for future trading opportunities rather than thrash around in these markets. There are important elections coming in Japan in July, Germany in September and while the markets seem to be churning right now some good trading trends may come from all this chop. Best wishes for good health and good trading.

Futures and futures options are the best way to trade currencies, metals, stock indices and many other financial and commodity markets. Call 604 664 2842 to talk with a futures broker.