Posted by Chris Mayer via The Daily Reckoning 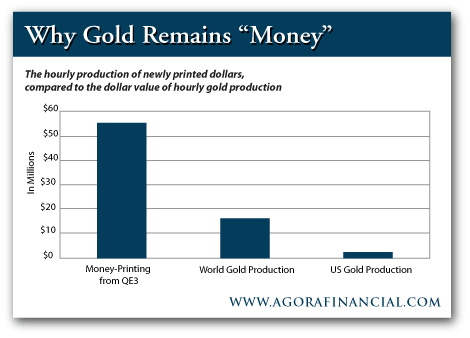 Yeah, yeah, I know…gold and oil are both hard assets, but that doesn’t mean they will both provide a reliable hedge against the inflationary trend Ben Bernanke is creating.

In short, I like gold much better than oil…at least for the next couple of years.

The best reason to own gold is also the most well-known reason. The US government prints a lot of money, as the nearby chart plainly shows. It is hard to fathom a readjustment of gold to keep up with the amount of money created. But that readjustment seems inevitable.

Obviously, inevitable is not the same thing as imminent. But there is good reason to think the gold price will top $2,000 fairly soon. The Deutsche Bank report shows how the gold price has pretty much marched in step with the Federal Reserve Bank’s money printing since 2000.

Based on all this kind of statistical analysis, even the mainstream Deutsche Bank predicts gold will top $2,000 in the first half of 2013.

The obvious take-away is to own some gold. Second, look at gold stocks — which have lagged the metal for some time and seem to be showing some life finally. The GDXJ, which is an exchange-traded fund made up of small gold stocks, is up over 25% since early May. It remains a good way to play a gold stock rally if you don’t want to take on the risks and frustrations of owning individual gold stocks.

I have said before that I think the oil bull market is on its last legs. In this, I’m just playing the odds. History and economics dictate what those odds look like.

For example, we know stock markets don’t trade for 30 times earnings — as the US stock market did in 2000 — for long. That was a figure far above the long-term average for stocks. And stocks subsequently crashed.

We know housing prices can’t sustain a price of 32 times the cost to rent them — as they did when housing prices peaked in 2006. That was again far above the long-term average of just 20 times. Housing prices later crashed.

Similarly, we can conclude that the current oil price — which is currently 230% above its long-term inflation-adjusted price — won’t last either.

Just how great you can see by looking at the previous chart. Crude oil is 230% above its long-term average in inflation-adjusted terms.

Besides, it is not as if we can’t see what will slay the oil price. There are many sharp swords all over the place.

Let us consider demand. The biggest economies on the earth — the United States, Japan, China and the EU — are all slowing down or contracting.

More oil? It turns out that on top of US oil shale, Alberta oil sands, West Africa and Brazil there’s yet another massive source of oil that may be coming to market. It’s called the Bazhenov Shale, it’s in Russia and it’s big. I’m no geologist, but I’ve been told it’s similar to the Cardium in Alberta. Exxon starts drilling there next year. The energy boom of the 1970s ended when the North Sea and Alaska North Slope came on line at the same time. It seems likely more than two major fields will hit the market this decade. It’s hard to see oil becoming relatively scarce anytime soon.

The Bazhenov shale could be another game-changer for the oil industry. It is yet another massive oil source to add to a list that keeps getting longer as new technology cracks open sources once thought unreachable.

People will come up with all kinds of reasons to discount the new oil supplies. But history shows that human beings are creative and tenacious.

I was among the early investors in the Bakken in 2008. I recommended Kodiak Oil to the subscribers of Mayer’s Special Situations. The stock subsequently doubled. Back then, I remember hearing some geologists scoff at the Bakken and its potential to produce significant amounts of oil at low costs. Yet, here we are. Even now, I think people still underestimate the amount of oil the United States could produce.

On oil, I must disagree with my friend Byron King, who writes Outstanding Investments and (in a revision to his older “Peak Oil” views) now says we’re at “peak cheap oil,” or the end of cheap oil. I could not disagree more.

So one thing is certain; one of us is correct.

I say it is also a certainty that oil will be cheap again. And then it will get expensive again. Then, cheap again. And so on. In other words, just like any other commodity, it will continue to boom and bust and go through cycles. Timing is the great uncertainty.

I am interested in putting my money in areas where the odds favor me. Increasingly, I don’t see the odds favoring me when it comes to oil prices. To me, oil is much like stocks in 2000 or housing in 2006. It’s overpriced and due for a sizeable selloff.

Chris Mayer is managing editor of the Capital and Crisis and Mayer’s Special Situations newsletters. Graduating magna cum laude with a degree in finance and an MBA from the University of Maryland, he began his business career as a corporate banker. Mayer left the banking industry after ten years and signed on with Agora Financial. His book, Invest Like a Dealmaker, Secrets of a Former Banking Insider, documents his ability to analyze macro issues and micro investment opportunities to produce an exceptional long-term track record of winning ideas. In April 2012 Chris will release his newest book World Right Side Up: Investing Across Six Continents.