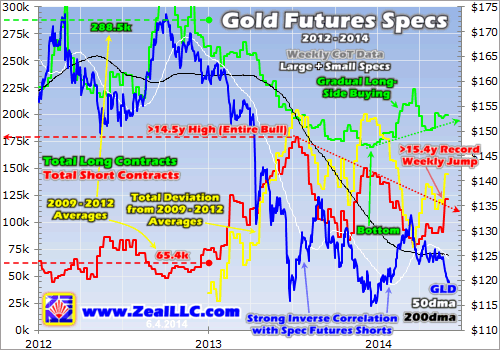 The precious metals plunged last week, knifing through key support zones to unleash an explosion of bearish sentiment.This troubling heavy selling wasnt news-driven, it emerged out of the blue.Who was dumping gold and why? Later data confirmed it was American futures speculators short selling gold and silver at record levels.Extreme shorting is very bullish, as these bets soon have to be covered.

The gold and silver price action has been exceedingly anomalous since early 2013.Thats when the Federal Reserve fomented a melt-up in the general stock markets, through both monetizing debt and jawboning implying it was backstopping stock prices.The levitating stock markets gradually sucked all life away from alternative investments including gold, which was crushed by epic selling of gold-ETF shares.

Western investors all but abandoned gold, leaving it solely at the mercy of American futures speculators.Their collective buying and selling always affects the gold price, but its impact is really amplified in this surreal world of withered investment demand.Since 2013s extreme record gold-ETF selling petered out in early 2014, gold and silver prices have been utterly dominated by trading in the US futures markets.

Speculating in gold futures is a super-risky hyper-leveraged game.Last month the CME Group cut the margin requirements on gold and silver futures by 7.7% and 8.3%.Now traders only need to keep $6000 in their account to control a single 100-ounce gold contract, and $8250 for a 5000-ounce silver contract.And at $1250 gold and $19 silver, these contracts are worth a whopping $125,000 and $95,000 respectively.

Thus a speculator running minimum margin has maximum leverage of 20.8x in gold futures and 11.5x in silver futures.This is astoundingly high.In the stock markets, the Federal Reserves Regulation T has legally limited leverage to just 2.0xsince 1974.At 20.8x leverage, a relatively small 4.8% move in gold futures in the wrong direction from any speculators bet will wipe out 100% of the capital they risked!

So futures speculators simply cant afford to be wrong for long, even if they arent running minimum margin.On Tuesday May 27th, they greatly expanded their bets that gold and silver prices would just keep drifting lower.So gold and silver plunged 2.1% and 1.9% that day, driving the final nail in the sentiment coffin for many precious-metals bulls.At the time, the source of this heavy selling wasnt clear yet.

Futures speculators can sell PM futures, effectively adding supply and driving down prices, in two very different ways.They can liquidate longs, the worst kind of selling.Once traders sell their long gold and silver futures positions, they have no obligation to return.They can stay out for a long time, certainly not helping the precious metals prices.So paring longs can sometimes be a very bearish omen.

Futures speculators can also short sell PM futures, effectively borrowing the metals from someone else before dumping them.They hope to buy back the futures later at lower prices to repay their debts, pocketing the price drop as profit.But unlike long liquidations, short selling is very bullish because traders are under a legal contractual obligation to buy long contracts in the near future to cover their shorts.

Futures short selling is guaranteed near-future buying, as every single contract sold short has to be bought back which adds demand.This bullish covering occurs soonfor two reasons.First, given the extreme leverage inherent in gold and silver futures, speculators cant risk being heavily short for too long.Second, futures contracts have built-in expiration dates.They have to be covered before those.

I doubt it.The flagship GLD gold ETFs mission is to track the gold price.So if stock traders werent selling GLD shares as fast as futures traders were dumping gold, GLDs price would have decoupled to the upside.GLDs custodians had to add new share supply to keep its price falling fast enough to keep pace with gold.So they issued new shares, and used the proceeds to buy more physical gold bullion.

Since GLD didnt experience differential selling that breakdown day, American futures speculators had to be the culprit.And Fridays CoT proved they were, on the short side.This first chart looks at the GLD price superimposed over speculators weekly total long and short positions in gold futures, taken from those CoT reports.When I saw this latest CoT data last Friday, my eyes nearly popped out of my skull.