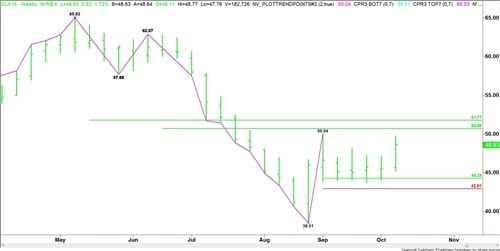 After weeks of floundering in the mid-$40s per barrel, a new rally for crude oil got underway this week. WTI jumped to $50 per barrel and Brent is now over $53 per barrel. There are several reasons behind the rally, some of which we have touched on before. U.S. oil production is declining, despite confusing weekly data from the EIA that sometimes suggests otherwise. The rig count fell sharply last week, which underpinned the notion that the sector is contracting.

November Crude Oil futures opened the week higher and never looked back. This week’s rally was triggered by a technical chart pattern and fueled by a number of fundamental events.

The conditions for the rally started to build on Friday, October 2. On that day, data was released showing a weekly drop in the number of active U.S. drilling rigs to their lowest level in more than 5 years.

Oil was drifting lower into the release of the rig data from Baker Hughes Inc. A weaker-than-expected U.S. Non-Farm Payrolls report early Friday was the catalyst behind the weakness since it signaled the potential for weaker energy demand, pushing prices lower.

According to Baker Hughes, the active rig count fell by 26 to 614 as of October 2. The total active rig count, which includes natural gas, fell 29 rigs to 809. With the lowest overall rig count since 2002, traders described the “big drop” as “definitely bullish.”

Some energy economists went as far as saying that the low rig count is an indicator of limited capital for drilling this quarter. Another potentially bullish occurrence.

The weaker-than-expected U.S. jobs report was perceived as bearish to oil prices initially. This was because it could lead to a drop in incremental demand growth, leaving the market with flat-demand into mid-2016. However, losses were limited because the U.S. Dollar dropped on the news, leading to speculation that foreign demand would increase.

The market received a boost over the weekend, leading to a strong opening on October 5 after Saudi Arabia cut pricing for November oil sales to Asia and the U.S. as the world’s largest crude oil exporter sought to keep its supply competitive with rival suppliers amid sluggish demand.

Traders reacted positively at the start of the week to the Saudi price cut, the drop in the rig count and speculation that China was preparing to implement additional stimulus. Global equity markets also strengthened along with commodity-linked currencies and severely oversold commodity markets. Demand for risky assets increased, underpinning crude prices.

Russia came into the crude oil picture this past week. Firstly, it started bombing ISIS positions in Syria, helping to put a slight speculative bid under the market. Secondly, it said it would not cut-back from huge crude output levels that have helped drive prices lower. Russia also came out strongly against rumors that it was preparing to join OPEC, with an analyst stating “there is no possibility of Russia cooperating with OPEC to manage supply and there is zero possibility of Russia ever joining OPEC.”
Speculators chose to ignore this last statement as the market rallied early this week after Russia said it was ready to meet with other producers to discuss the market. Russia also set up a separate meeting with Saudi officials at the end of October.

Prices were supported by the news of the Russian meeting with OPEC and Saudi Arabia. While speculators believe these talks may lead to a cut in output, several analysts stated that the geopolitical tension created by Russian cooperation with Syria probably means OPEC will not agree to any production cuts. Nonetheless, speculators liked the news and shorts were worried enough about the possibility of cooperation between the Russians and the Saudis to cut positions.

In summary, traders chose to ignore this week’s potentially bearish U.S. Energy Information Administration’s weekly crude oil inventories report. Instead they decided that Russian willingness to cooperate with OPEC and the weaker U.S. Dollar are reasons enough to speculate on the long side of the market.

The market accelerated to the upside when the swing top at $47.10 was taken out with conviction. If the upside momentum continues then look for the rally to extend into the next major top at $50.04. This is followed by a major 50% level at $50.69.

The 50% level at $50.69 shows up on both the daily and weekly charts. Trader reaction to this price is likely to determine the direction of the market over the near-term.

Watch the price action and read the order flow at $50.69 this week, if tested. Trader reaction to this level will tell us whether the bulls or the bears are in control.